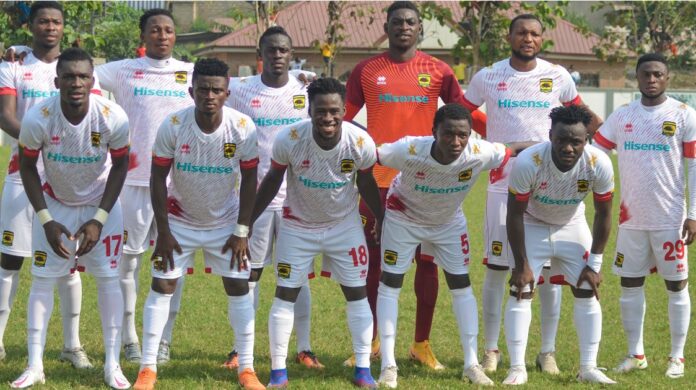 The Porcupine Warriors were dominated by the Academy Boys in the first half of the pulsating and end-to-end game of the week nine fixture of the Ghana Premier League 2020-21 season.

On the 29th minute mark, In-form attacker, Daniel Agbloe Lomotey opened the scoring to put the hosts 1-0 up after being the better side of the opening 30 minutes of action and his goal was enough to send the home team back into the dressing room with their noses in front.

After the break, Kotoko came strongly into the game and started playing well by opening up the defense line of the Academy Boys with a more compact game in the second 45 minutes of the match.

Brazilian import, Fabio Gama Dos Santos was presented with a good chance on the 55th minute to draw the Red and Whites level but failed to capitalize on the chance that came his way.

Seven minutes later after Fabio Gama’s miss, strike Kwame Opoku snatched the equalizer for the Porcupines on the 62nd minute with a tame strike but managed to beat the goalkeeper to make the score all square with 28 minutes left on the clock to play.

Both teams had few chances thereafter but could not utilize their opportunities as the game finished 1-1 at the end of the 90 minutes.

‘I’m here as your sister’ – Prince Harry and Meghan in...