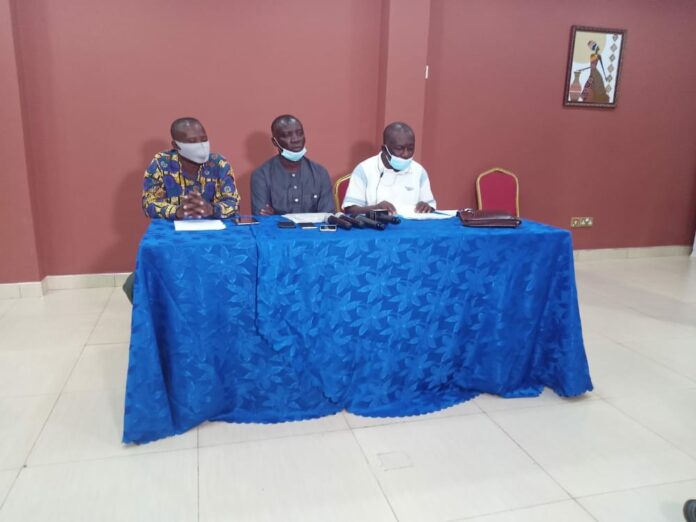 A water crisis looms in Obuasi as illegal miners threaten the life of two major dams that provide water to residents in the mining town.

The two water bodies, River Gyimi and Oda feeds both the AngloGold Mining Company and the Obuasi township.

But according to the Adansiman Progressive Youth Association (APA), a pressure group in the Obuasi Municipality, the dams are producing under capacity due to siltation and other forms of pollution caused mainly by illegal mining.

“The Watereso Water Project which feeds the Obuasi Community is broken down due to illegal mining and dredging for gold in the [Oda] River.

“The pressure is now on the Gyimi Dam which feeds the AngloGold Ashanti Mine and the Obuasi Community”, the group said during a press conference at Obuasi.

Speaking at the press conference, President of the group, James Addai said its investigations has revealed that the upper coarse of the river is being disturbed by illegal mining citing the president of the Adansi Traditional Council, Opegya Kotwere Bonsrah Afriyie as the man fueling the act.

“It will interest you to know that while the government, the Asantehene, Okyenhene and other well meaning stakeholders are bent on eradicating illegal mining on our water bodies, the Adansihene is mining in the River Gyimi. Was it the government that authorized Adansihene to mine in the upper coarse of the river? he quizzed.

He further disclosed that a joint operation by the police and members of APA led to the arrest of several Chinese and Ghanaian illegal miners who named the traditional ruler as the owner of the site.

The group intends to petition the Asantehene and other stakeholders to call the traditional leader to order.

“…Obuasi has been without water for about one week and the water started flowing recently. No wonder we are experiencing this due to illegal mining.

“We are appealing to Asantehene Otumfuo Osei Tutu II and the President to “save Obuasi and the mine from water shortage due to illegal mining”, he added.

It comes on the back of a pronouncement made by the Asantehene Otumfuo Osei Tutu II that two of his chiefs are being investigated for their involvement in the menace which has seen many rivers and forest reserves destroyed.

A Public Interest Advocate and native of Adansi, Frank Aboagye Danyansa has mounted a strong defence as fights off the claims made by members of the APA.

Advancing his argument on Kumasi-based Akoma FM, Mr Danyansa said the Convener of the group,Akwasi Aboagye whom he engaged on the platform was alien and should not be taken seriously.

“I am not sure this so-called Akwasi Aboagye is a true native of Adansi because he won’t have tarnished the image of his Paramount Chief. Again, he is even an embattled member of the group because he was expelled on grounds of impersonation and extortion. Why must you even give him such a big platform to perpetrate lies?” Frank quizzed.

He further urged the public to disregard such claims and treat it with the contempt it deserves.

Owusu Bempah, four others caged for seven days for threat of...