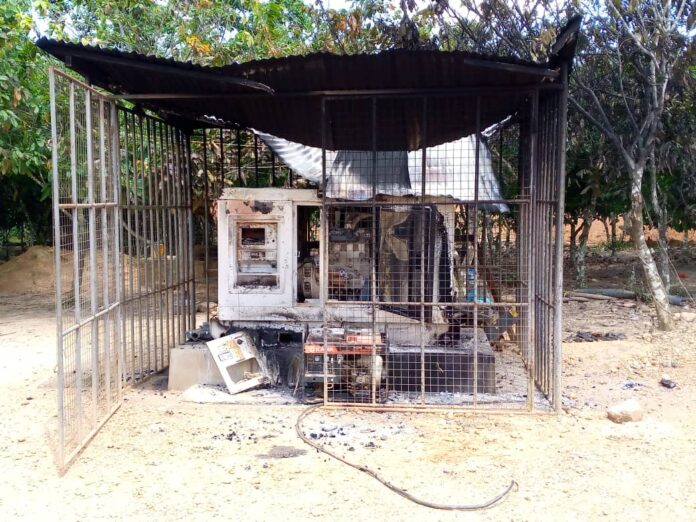 Workers of Xtra Gold, the mining company belonging to New Patriotic Party’s National Women’s Organizer Kate Gyamfuaa have been narrating how they were assaulted by the military taskforce during its latest operation at their mining site.

The members of ‘Operation Halt’ raided the licensed small-scale mining company located in the Atiwa West District of the Eastern and set ablaze a structure that serves as offices at the site.

In their latest visit, the military personnel besieged the site and allegedly assaulted five private security guards employed by Madam Kate Gyamfua to protect the company, before setting the site ablaze.

Some of the private security personnel shared their ordeal.

“They assaulted us without giving reasons. There was a soldier who was just assaulting us. They asked us to leave the site or face their wrath. They set the building ablaze after we left the site,” one of the security men said.

“The soldiers stormed the site and set the office ablaze. The fire destroyed our plant, carpet and other items etc.”

Last week, military personnel stormed the site and burnt 16 excavators and a bulldozer.

The company had said it views the development as a violation of the rule of law.

It said despite paying “big money” in royalties and taxes to the government, it had its equipment destroyed.

A statement from the Ministry of Information said the exercise, dubbed ‘Operation Halt II’, is aimed at “removing all persons and logistics involved in mining on water bodies”.

“The new phase of the operation focuses on the tributaries of the Pra River, which have also been significantly affected by the activities of illegal miners,” the statement added.

The Ghana Armed Forces has also commenced armed patrols on the Pra River.

The operation is being undertaken by a little over 400 men of all ranks.

SOURCE: DAILY MAIL GH with files from the CNR

700 new hotel restaurants and bars will be opened in Africa...