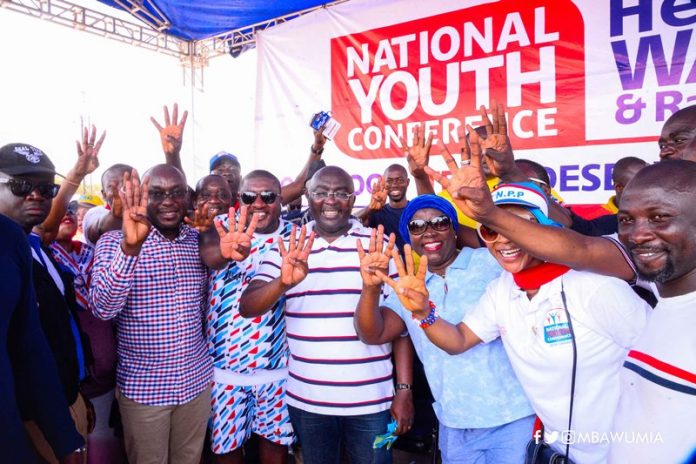 The governing New Patriotic Party (NPP) has pledged to create more jobs and factories in every Ghanaian district in its second term.

The NPP since its return to power following its annihilation of the National Democratic Congress (NDC) in the  2016 general elections, created over two million direct and indirect jobs targeted at the Ghanaian youth.

Seven hundred and seventy-eight thousand of those jobs were in the public sector, 268,000 in the formal private sector, and 1,000,000 in government job creation programmes including the famous NaBCo, said Nana Akomea, a member of the NPP’s communication team.

Addressing a news conference on Monday, October 26, 2020, in Accra, Akomea recalled how the NPP in 2006 introduced the National Youth Employment Programme.

“…The famous NYEP which is arguably the first deliberate policy of any government in the Fourth Republic, to directly and systematically provide jobs for you the Ghanaian youth.  For the two years period of 2006 to 2008, a total of 108,000 direct jobs were provided to you under the NYEP,” he stated.

“Sadly, very sadly,” he bemoaned “in the period after 2008 when the NPP left office, the NYEP was turned into the very infamous GYEEDA, and youth employment became a vehicle for some of the most bare face corruption and stealing of taxpaying monies in the history of the Republic.”

Going forward, Akomea said the next NPP government will ensure that job creation and availability of jobs to the youth are increased sustainably.

He said the Ghanaian youth should be particularly excited about the massive and sustained industrialization programme going on in the country, through the one district, one factory policy.

“This particular programme, in the next four years should result in a factory /manufacturing facility in every district in our country,” Akomea said.

“These factories will throw up tens of thousands of direct jobs for you the youth.  The food processing factories will see over 50% of our agriculture produce (the maize, tomatoes, peppers, corn, cassava, palm nuts, etc) processed, thus turning our currently predominantly peasant agriculture into commercial business.

“The potential of this real development to provide jobs for you the youth is enormous. And this is no pipe dream.  This is a reality that will come to pass in the next four years in the NPP government,” he said.