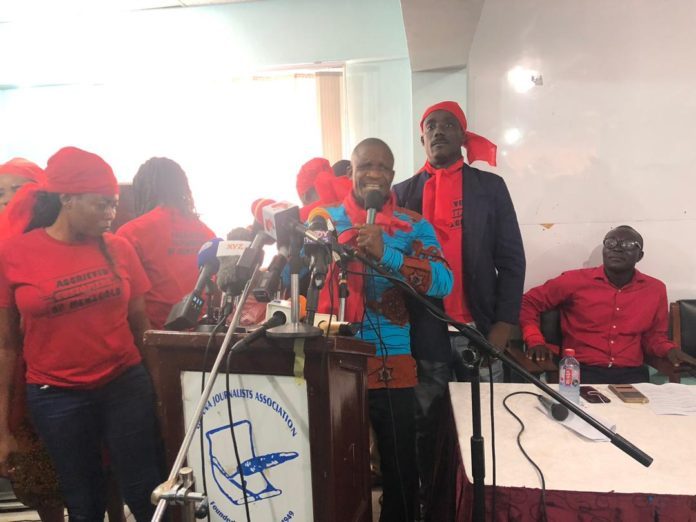 Customers of Ghanaian defunct gold trading firm, Menzgold Ghana Limited, say they are going through “hell” following their inability to recoup their investments.

Menzgold folded up after Ghana’s Securities and Exchange Commission (SEC) ordered it in September last year to suspend operation with the public.

According to the Commission, Menzgold did not have the license to trade in gold collectibles and that doing so was in contravention of the Securities Industry Act, 2016 (Act 929).

The customers for months had been demanding payment of their principal investments after the gold dealership company was forced to halt operation by SEC’s directive. Several efforts by them targeted at the company to get their monies have failed to yield any positive results.

Addressing a news conference on Wednesday in Ghana’s capital, Accra, they painted bleak and struggling picture of their various households saying: “We are going through hell. If I say hell, I mean hell. We cannot carry our kids and bring them here, but our kids are suffering. We cannot give them a better life because of what is happening now. We need to build a future for our kids.”

Appiah Mensah’s remanding followed a request by the police for two weeks to enable them complete investigations into allegations of defrauding against him.

The court process, the police say was in pursuance  of the cases that have been filed against NAM 1 by disgruntled Menzgold customers.

Addressing the press conference the PRO of the Coalition of aggrieved Menzgold Customers, Fred Forson said that they would embark on unabated demonstrations in order to get their locked up cash back.

“We want to hear from NAM1, we have supported him all this while and it is time we hear from him…we want to demand from the CID that we want to meet Nana Appiah Mensah in person. Wherever he is, he needs to address us as leaders of Menzgold customers.

State prosecutors are also aiming to put his wife and his sister behind bars for allegedly defrauding 16,000 people of about GH¢1.68 billion.

The wife and the sister are facing four counts, including defrauding by false pretence alongside NAM1.

The Chief Executive Officer (CEO) of Menzgold Ghana Limited, Nana Appiah Mensah, aka NAM1, has been accused of allegedly defrauding 16,000 customers of more than GH¢1.68 billion between January 2017 and September 2018.

Two of his companies — Brew Marketing Consult and Menzgold Ghana Limited — represented by him, have each been charged with defrauding by false pretence, contrary to sections 20 (1) and 13 (1) of the Criminal Offences Act, 1960 (Act 29).

The two companies have also been charged with carrying out a deposit-taking business without a licence, contrary to Section 6 (1) of Act 930.

Particulars of the offences

A charge sheet sighted by Graphic Online’s Mary Mensah on the crime beat stated that between January 2017 and September 2018, Brew Marketing Consult and Menzgold defrauded one Francis Agodzie and 16,000 others of more than GH¢1.68 billon.

It further accused the two entities of carrying out an illegal deposit-taking business during the same period.

The charge sheet explained that Mensah, Appiah and Tetteh aided Brew Marketing Consult and Menzgold to defraud the customers of the GH¢1.68 billon.