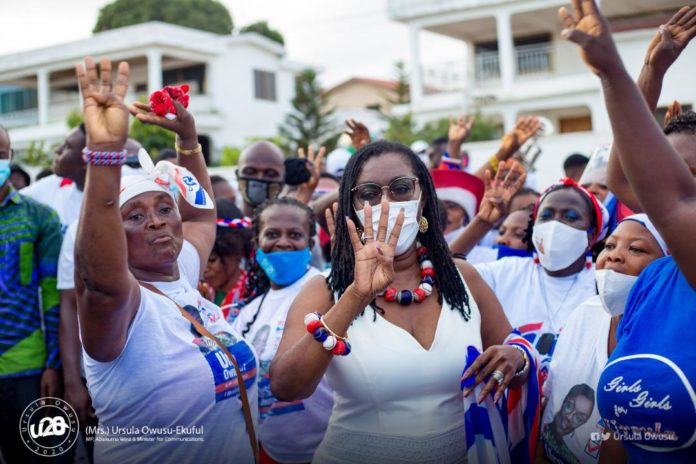 The Member of Parliament for Ablekuma West constituency, Ursula Owusu Ekuful, officially filed her nomination forms on Thursday to seek reelection in the December 7 parliamentary polls.

The two-time lawmaker who doubles as Ghana’s Communications Minister submitted her forms around 1600 GMT with a GHs10.000.00 banker’s draft as the filing fee.

Addressing enthusiastic party supporters after presenting her forms at the Electoral Commission office, Mrs. Owusu-Ekuful vowed to retain the seat for the governing NPP by hugely defeating the National Democratic Congress’ candidate.

Expressing confidence that the people of Ablekuma West will return her to parliament as their MP, Mrs. Owusu-Ekuful noted that’s because they knew she was seeking power to serve not to lord it over them. “We are always with them, we know what their issues are.”

The constituency has seen massive infrastructural uplifting in the last three and half years including; 25 kilometers of asphalt and still counting, Western Link Road still under construction and expected to be completed by the time elections are due, among other social interventions to better the living conditions of her constituents.

For instance, Mrs. Owusu-Ekuful during this period provided numerous scholarships to students in her constituency, as well as giving loans to over 5000 people to support the various businesses that they are engaged in.

“Those who want work and pay taxis they received some and jobs and skills training opportunities have been made available to our people here who need it, scholarships were given.  Even in addition to the free SHS, we were still providing scholarships for tertiary students and our primary students. That’s always ongoing and the list is endless,” she stated to massive cheers from the crowd.

Mrs. Owusu-Ekuful continued: “Health infrastructures are being built in the constituency, police stations are being constructed and a courthouse is being built…even this assembly premises we are standing in today wasn’t here four years ago.

“It was Ursula Owusu Ekuful who lobbied for us to have our municipal assembly and procure this premise for them and this is where we are today. There is no way we are going to work this hard and leave it to someone else to come and occupy.” she added.

I’ve not resigned from NDC to join NPP – Chief Biney

Ghana is lucky to have you as president now – Council...