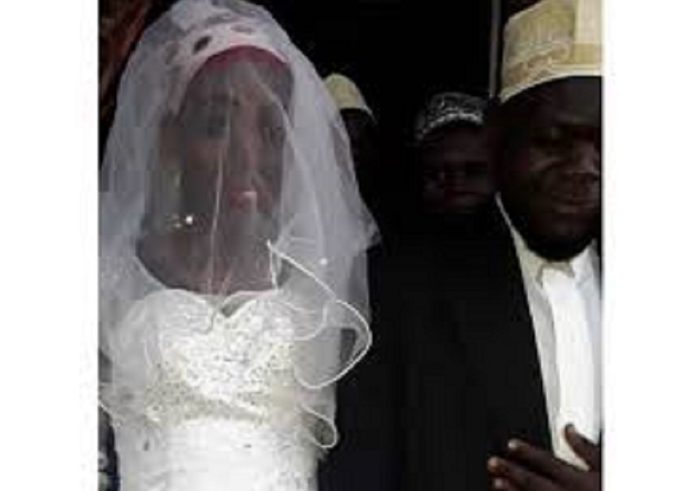 The Uganda community of Imam of Kyampisi Masjid Noor mosque in Kayunga District has been thrown into a state of shock following the suspension of an Imam who unknowingly wedded a man.

Sheikh Mohammed Mutumba has been suspended as investigations begin into the bizarre incident. Muslim leaders in the area say the suspension will preserve the integrity of the Muslim faith.

Two weeks ago Sheikh Mutumba exchanged vows with his supposed wife Swabullah Nabukeera after meeting at the Kyampisi mosque.

“I was looking for a woman to marry and when I landed on a beautiful girl wearing a hijab, I asked her for love and she accepted. We fell in love, however, she told me we could not have sex until I take dowry to her parents and also exchange marriage vows,” narrated Mutumba.

Two weeks into their union, the couple is reported not to have gotten intimate as the ‘bride’ claimed that she was in her period.

But things took a different turn during the waiting period.

Mutumba’s neighbour accused his newly wedded wife of jumping over a wall separating their houses and stealing clothes and a television set.

The matter was reported at the Kayunga Police Station and police officers were dispatched to arrest Nabukeera.

A female police officer was asked to search the suspect thoroughly before taking ‘her’ to the cells.

“However, to the shock of the officer, the suspect had stacked clothes in the bra to hoodwink that they were breasts.

On further search, we discovered that the suspect had male genitals. We quickly informed ‘her’ husband who had escorted her to the police station,” said Mugera.

Shocked by the revelation, Mutumba requested for the police to let him look at Nabukeera’s private part to prove for himself that he has wedded a man.

A dumfounded Mutumba raised an alarm, accusing Nabukeera of being a thief.

During interrogations, Nabukeera revealed that his real name is Richard Tumushabe and that he duped Mutumba so as to get his money. He was charged with impersonation, theft and obtaining goods by false pretence.

Nuuru Nabukeera, Tumushabe’s alleged aunt was also arrested and admitted that Mutumba had paid dowry including two goats, two bags of sugar, a carton of salt and a Koran.

She claimed that she did not know her ‘niece’ was male as she got to know him when he was already an adult.

According to Mutumba’s neighbours, they have not seen him for days, with a source telling Daily Monitor that the devastated Imam was receiving counselling from a relative. They also admitted that it was not easy to establish that Tumushabe was masquerading as a woman.

“The ‘bride’ did all the house chores such as cooking, washing clothes and others while the husband was away but it was not easy to know he was just masquerading as a woman,” a neighbour said.

CBG posts profit in less than a year in operation