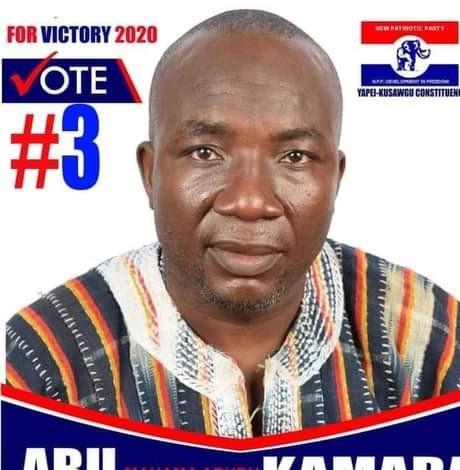 The New Patriotic Party (NPP) Parliamentary Candidate for Yapei-Kusawgu Constituency in the Savannah Region, Abu Kamara has died in a road accident.

Mr. Kamara passed on after the vehicle he was traveling in crashed into an articulated truck near a police post at Datoyili at about 10:30 pm local time.

He had traveled to inspect some projects when the incident occurred Friday.

Kamara and two others, including his aide, died at the scene, the CNR reported.

The leadership of the New Patriotic Party has confirmed the death of their member in a statement.

“With a heavy heart, the Savannah Regional NPP and the party at large announce the unfortunate demise of our Parliamentary Candidate for the Yapei Kusawgu Constituency, Abu Kamara. He died with an aide, Majeed Kotochi (Young Chief), and another occupant in an unfortunate accident at the Datoyili police barrier. May their Souls Rest In Peace. Amen.”

Their bodies have been deposited at the Tamale Teaching Hospital as police are yet to give a detailed account of the incident.

Mr. Kamara until his death had been campaigning vigorously to snatch the seat from sitting NDC MP and former Power Minister John Jinapor ahead of the December polls.