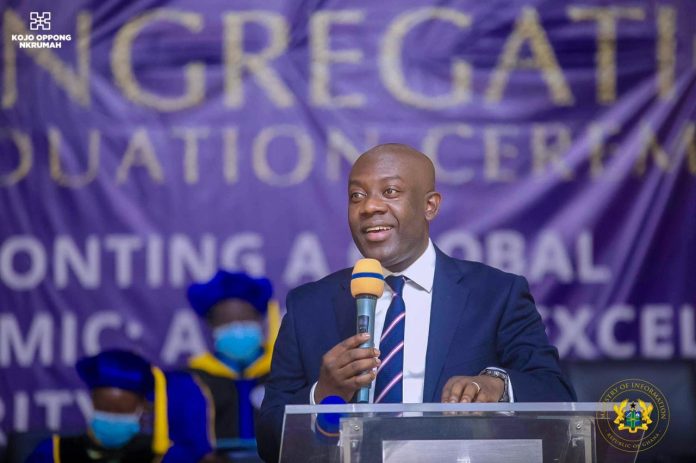 The government has called on political actors to be responsible in their opposing comments on national issues in order not to undermine Ghana’s enviable democracy.

The Minister of Information, Kojo Oppong Nkrumah in direct response to comments by the dean of the University of Ghana Law School, Professor Raymond Atuguba, said while the government has no problem with people expressing divergent views on policies and national developments, it abhors attempts to incite the people to revolt.

At a public lecture in Accra, Atuguba is reported to have said Ghana’s current financial state is a threat to its democracy.

“A big part of why certain coups succeed and others fail is the economy. What is the state of Ghana’s economy today?

“At the level of the most irreducible idiomaticity, Ghana is broke. Your nation is radically broke. So broke, the Speaker of Parliament has publicly warned, gavel in hand, that we may not be able to pay the salaries of public sector workers in the next three months,” he said.

However, reacting to the statement, Nkrumah said: “Comments to the effect that some conditions are rife for a coup are most unfortunate and disappointing. They are disappointing because despite COVID-19, Ghana’s current economic status is far better than the days of yesteryear when there was no global pandemic.”

“Even if they were worse, the constitution provides legitimate means for advocating for and executing a change. For respected persons to be purporting that such conditions legitimise coups is a terrible attack on our democracy itself and should not be condoned,” Nkrumah told journalists in Accra.

Meanwhile, Atuguba’s comment has received widespread condemnation notably from former Attorney General Dr Obed Asamoah, describing the statement as “childish” and coming from someone who is unaware of the consequences of military takeovers.

Similarly, Speaker of Parliament, Alban S.K Bagbin expressed worry over the comments from the renowned professor. He said comments like that are in bad taste and does not auger well for the progress of the country.

‘I felt the spirit of Ghana at the Baba Yara Stadium...