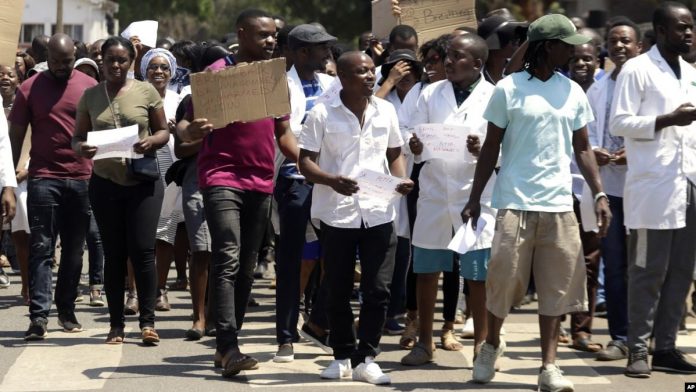 The body in charge of the public health service in Zimbabwe has said that 211 doctors have been sacked this week because of their on-going strike for better pay.

The doctors were “found guilty of absenting themselves from duty without leave or reasonable cause” for five or more days, according to a statement from the Health Service Board (HSB).

The strike began in September.

The HSB said almost a third of all doctors – 516 out of 1,601 employed in government-funded hospitals – either have faced or will face disciplinary tribunals.

The Zimbabwe Hospital Doctors Association has not commented on this latest news, but had earlier complained of intimidation, Reuters news agency reports.

The strike has paralysed major hospitals, and its mostly only emergency cases which are being attended to.

The government says it cannot afford to increase salaries as Zimbabweans call for a speedy resolution to what some are now referring to as a slow genocide, the BBC’s Shingai Nyoka in Harare says.

The country is in the midst of an economic crisis and high inflation has severely eroded people’s earnings.

The real value of a doctor’s salary has therefore plummeted to the equivalent of less than $100 (£80) a month.

“What we get paid is no longer enough for food or rent,” Zimbabwean Dr Lindsey Robertson told BBC Newsday earlier this week.

KOTOKO – HEARTS: How to Keep Up the Numbers

Huawei Nova 7i with outstanding performance is now available in Ghana

HUAWEI nova 7i tames Samsung Galaxy A51 in showdown