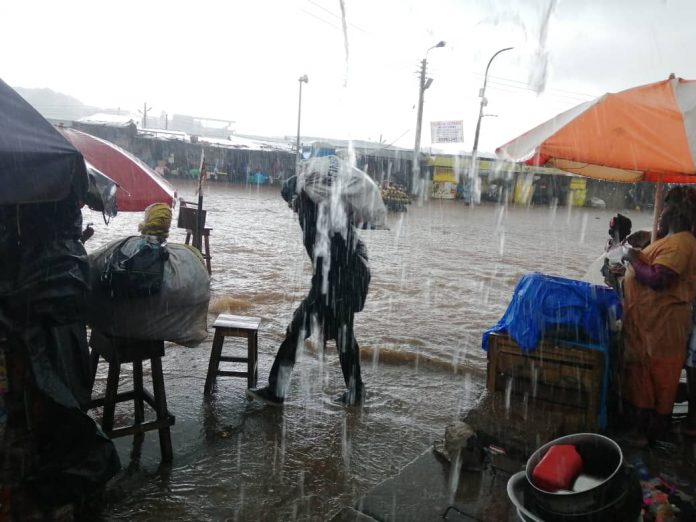 A total of 11 people have been killed by flash floods, lightning and torrential rains in the Ashanti region – within the spate of one-and-half month.

The National Disaster Management Organization (NADMO) says all the victims are minors —in the incidents which occurred at separate locations between September and October this year.

The development comes after a nine-year-old boy was killed following torrential rains at Abuakwa, in the Atwima Nwabiagya South Municipality last Saturday. The body of the victim was recovered early Sunday morning following a search by NADMO officials and town folks.

“For almost one-and-half month now children under 10 years have swept by the rain. The last one happened at Abuakwa…But we have intensified education in all the 43 districts in the Ashanti region since I assumed office. As we all know, probably most of the people in the rural communities do not know much about climate change. And whenever it rains a life is lost. It is a matter of worry”, Nsenkyire explained as he pushes for the introduction of disaster management into the school curriculum.

He also linked the incessant rains to climate change urging the media to intensify education on the phenomenon.

Major roads leading to the Central Business District from the market were submerged in floodwaters as drivers and other road users got stranded.

Some pedestrians were left with no option but to remove their footwear in order to wade about in the flood waters which had risen to the waist-level.

Other areas that were hit by the floods include; Adum, Abuakwa, Manhyia and Ash-town.

The development appears to expose authorities’ inability to enforce existing by-laws to curb the indiscriminate dumping of garbage into drains.

Some residents who spoke to DailyMailGh believe more needs to be done to curb the perennial flooding in the Region.