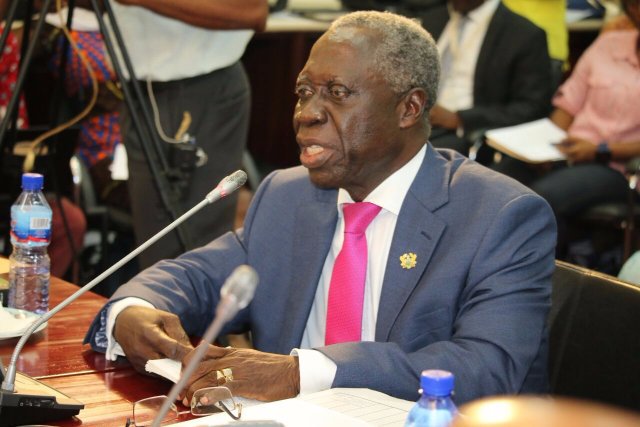 The Senior Minister Yaw Osafo-Maafo has responded to claims by the Auditor General, Daniel Yaw Domelevo that he led the government to pay a private firm Kroll and Associates $1m for no work done.

Mr. Osafo-Maafo in a letter addressed to the Auditor General dated 8th October 2019 sought to set the record straight on the matter involving the Private firm.

He said approval for request for single source procurement of professional services was obtained contrary to claims by the Auditor General that he failed to seek approval from the Procurement Authority.

On the accusation that the Senior Minister through the Finance Ministry made full payment of more than GHS 1m to Kroll and Associates with no proof of work done, Mr. Safo-Maafo in his response said “Proofs of work done by Kroll and Associates are contained in their respective reports submitted to the office of the Senior Minister, COCOBOD, Bank of Ghana and Economic and Organized Crime Office(EOCO). The Consultancy services with Kroll is ongoing and expected to continue for a period of four years”.

The letter to the Auditor General also revealed that “one of Kroll’s reports for work done was in respect of LITHOvit agro-chemicals supplied by Seidu Agongo to COCOBOD for USD106,541,589.82 which is now the subject of a case in the High Court…. The work done by Kroll in this case included Bank Analysis and Supplier Overview which disclosed that 90% of the revenue Seidu Agongo earned from COCOBOD was from agro-chemicals sales amounting to USD 106,541,589.82 which has turned out to be worthless”

Mr. Osafo-Maafo in his response also stated that Kroll is still conducting investigations into several other cases for the Government of Ghana. The firm is also assisting in assets recoveries and prosecution.

Below are copies of Mr. Osafo-Maafo’s letter to the Auditor General and documents as evidence of his engagement with the Procurement Authority and other relevant state agencies on the transaction.