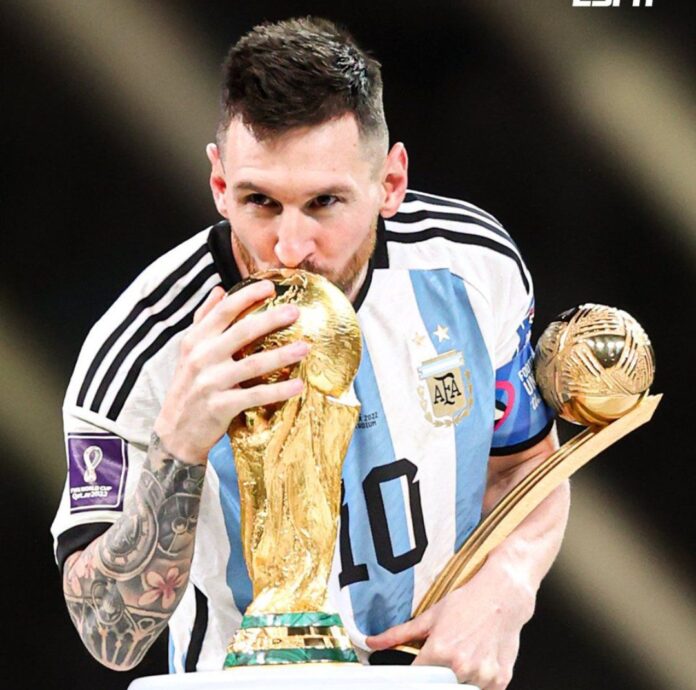 When Lionel Messi’s World Cup moment finally came, after 17 years with the Argentina national team and 16 years of competing in this tournament every four years, after winning the Golden Ball as best player but losing the trophy he wanted most eight years ago, after competing in more World Cup games than any man ever, after he’d won the damn thing for Argentina twice on this very night, he merely was a spectator like about a billion other people.

Of course, it was so much different for him. Messi literally had done all he could do for Argentina as Gonzalo Montiel approached the spot in the penalty kick shootout against reigning World Cup champion France. Messi played every minute of every game.

He scored Argentina’s first goal to give his team an early lead. He delivered a goal in extra time after France had rallied to tie the game and force the extra session.

He dazzled throughout the entire game, controlling the ball and creating chances for Argentina. And when all of that couldn’t quite secure the victory, Messi was the first on his team to step forward and knock a penalty into the net after the game had ended with the score tied, 3-3. No soccer player does it alone, but now he was entirely reliant on his teammates.

Montiel blasted the ball inside the left post and elevated Messi past the last hurdle toward standing as the best ever to play this sport. Officially, Argentina won the shootout 4-2, but the accounting of that event rarely survives into memory. What shall be remembered is this: To his vast collection of league championships, Champions League titles and World player of the Year honors, and to such international titles as the Copa America, the FIFA Under-20 World Cup and the Olympic Games, Messi finally added a World Cup.

Messi had said this would be his last final for Argentina. He will go out a champion in the way that few athletes get the opportunity to do.

The World Cup is what those still advocating for the legends Pele and Maradona could employ most handily against Messi. It’s not a small matter. This is the biggest sports event in the world, so certainly an icon would not be entirely complete without it. Now, when fans engage in this debate in pubs or talk radio or social media, there will be no missing item from Messi’s resume.

This is Argentina’s first World Cup in Messi’s lifetime, which means he has, essentially, been pursuing this trophy since he was born. Argentina won this in 1978 with Mario Kempes winning the Golden Ball as best player and Golden Boot as top goal scorer. They won it in 1986 with the great Maradona winning the Golden Ball. Messi was born a year later, and now he has given them a third star above the crest, won his second Golden Ball and earned a first World Cup gold himself.

In a way, Argentina had to win the final three different times, because they lost it twice along the way.

In the 22nd minute, he got the ball along the left side and found himself being marked by a forward, Ousmane Dembele. There was no one in the area to offer Dembele assistance; it was just the two of them, so Di Maria opted to pursue something greater.

He faked toward the end line, then cut back to the open field and left Dembele behind — just not too far behind. Di Maria waited just long enough for the defender to approach and make a mistake. When Di Maria felt the contact, he dropped to the turf at Lusail Stadium.

Yep, it was a penalty. Which meant Messi would be taking it. Which meant Argentina was about to lead by a goal.

It was all designed in that single instant of brilliance from Di Maria, who has known Messi since they were kids and recently said of him, “For me, being by Leo’s side is everything. He’s the best in the world, an alien, and I won’t get tired of saying it. And I’ll say it again: Playing with Leo is the best thing that has happened to me in my career.”And then Di Maria doubled that lead with a beautiful goal to complete a 2-on-1 break in the 36th minute. It seemed that 2-0 lead would survive into history.

However, Mbappe got France’s first goal when he stepped forward to take a penalty. Then the tying goal came when the ball was stolen from Messi near midfield and quickly transformed into an opportunity. It might have been Messi’s only real mistake of the game, taking on too much in that instance, and ultimately paying for it. The ball was passed to Mbappe, who was able to dash into the box and fire a hard shot toward the right post that Martinez could not reach. It was 2-2, and the World Cup no longer was in anyone’s grip.

The moment it appeared Messi figuratively had grabbed onto the World Cup for good was as representative of modern sport as it possibly could have been. Which is to say no one was entirely certain in the moment, and then no one was entirely convinced for several moments after that, and then all the technology in use confirmed he had scored what appeared to be the game-winning goal with just a dozen minutes left in extra time.

By the time all that had been untangled and Messi’s goal had been confirmed, Kylian Mbappe had earned a penalty kick for France by sending a strike off the arm of — wouldn’t you know it? — Montiel in the area. OK, it was literally five minutes later, but it seemed to happen that fast. Mbappe converted from the spot, and after each team had at least one more great chance to end it, the game went to penalties.

For the second time in this World Cup, Argentina goalkeeper Emiliano Martinez did what he could to assure Messi would return from Qatar with the World Cup. He saved France’s second attempt, from Kingsley Coman, by smothering his shot to the left. That shook up France’s Aurelien Tchouameni enough that his drive to the left skipped outside the post. It was just about Argentina delivering then, and first Leandro Paredes and then Montiel took care of that with confidence and precision.

“It’s a moment that we’ve got to enjoy, mainly for the people,” Argentina head coach Lionel Scaloni told Fox Sports “We’re used to going through tough times. Today we had things happen, they reacted. It’s such enjoyment to be at the top, the summit.”

Argentina’s celebration was human, in every sense. Each of his teammates took a turn embracing Messi, bathing his shoulders in their tears.

My goodness, did they want this for him. So many of them were kids when he began playing for their national team. They grew up understanding the best player in the world played for their nation. Montiel was a teen when Argentina played in the 2014 World Cup final and lost in extra time, 1-0, to Germany. When Messi appeared in his first World Cup, in 2006, breakout star Julian Alvarez was six.

They are all grown up now. And they are world champions.As is the old guy with all the trophies.

What you need to know about IMF programme