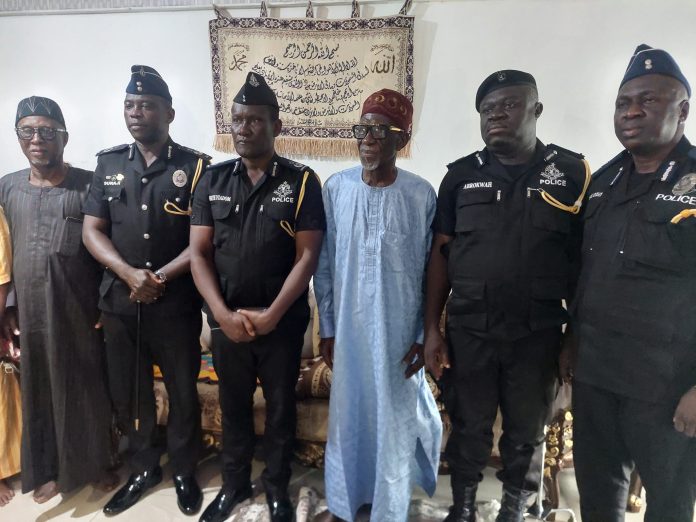 The alleged comments by the on-duty officers who were recording the incident captured on a Closed Circuit Television (CCTV) screen with a mobile device have since gone viral, sparking uproar among members of the Muslim community.

“Have you seen their attitude [referring to students of the Islamic SHS]? Do you think if it was an Akan school they will behave that way?”, one of the officers is heard in the nearly three-minute video. Another exclaimed: “They are dirty. They are dirty! Wherever these Moslems are, there is problem…”

A delegation from the Ghana Police Service which visited the Zongo Chief of Kumasi, Alhaji Umar Sulta Farouk has confirmed that the four officers were interdicted after the attention of the office of the Inspector-General Police (IGP) was drawn to the said video.

“Such[a comment] doesn’t represent the Ghana Police. So we are here to apologize. As I speak the officers, including a Chief Inspector have been interdicted. They are under service inquiry for exhibiting such unprofessional conduct and we support this decision. We should treat this with the contempt it deserves”, DCOP Suraji told the gathering.

He further assured the Muslim leaders that the police maintain high professionality neutrality blind to religion, tribe, or ethnic group for which reason they took immediate action on the said police officers.

This brings the total number of officers interdicted to seven, including a Deputy Ashanti Regional Police Commander, DCOP Kwasi Akomeah-Apraku, who was serving as an acting Regional Commander at the time.

Two other senior officers ACP George Ankomah, the Regional Operations Officer and ACP Alex Cudjoe Acquah, the Suame divisional commander were also interdicted after the IGP visited the school to sympathise with the students.

What happened at Islamic SHS?

At least 30 students of the Islamic Senior High School in the Ashanti Region of Ghana were rushed to the hospital on Monday June 13, after police allegedly opened tear gas on them while they were demonstrating over frequent road accidents in front of the school.

According to local media reports, the students had blocked the road in front of their school in the course of their protest over frequent knockdowns.

In their protests, the students lamented that frequent calls for speed ramps have fallen on deaf ears.

Police were called in to clear the roadblock and disperse the demonstrating crowd.

Some of the students were said to have gone unconscious and others were left with severe pain. It is however not clear if that is a result of the alleged firing of tear gas.

The Speaker of Ghana’s parliament, Alban Bagbin, has since directed the Defence and Interior Committee to visit the IGP and the Ashanti Regional Police Command over the incident. He also directed the Committee to visit the Islamic SHS, the hospitals where the injured students have been admitted and see to their welfare and report back to the House next week Tuesday, June 21, 2022.

“I think that our security officers should not in such cases, be releasing police with live bullets on such situations. But if the Police are actually investigating the matter now, what we can do as a House is to immediately show concern. Let the Police know that we are awaiting their report and then after the report, we are entitled to take further action”, he noted.

Mr. Agyapong revealed that the urban roads failed to provide speed ramps on the road despite several requests from the school.

“We have evidence,.. the school has written to the Ashanti Regional Urban Roads director since  2010, the last one was September 2021, nothing has been done, people are dying, people get injured, damage to their cars.

“And all the letters get no results. I think somebody should be fired from there, honestly. If I were the minister, I will fire the urban roads director,” he said.