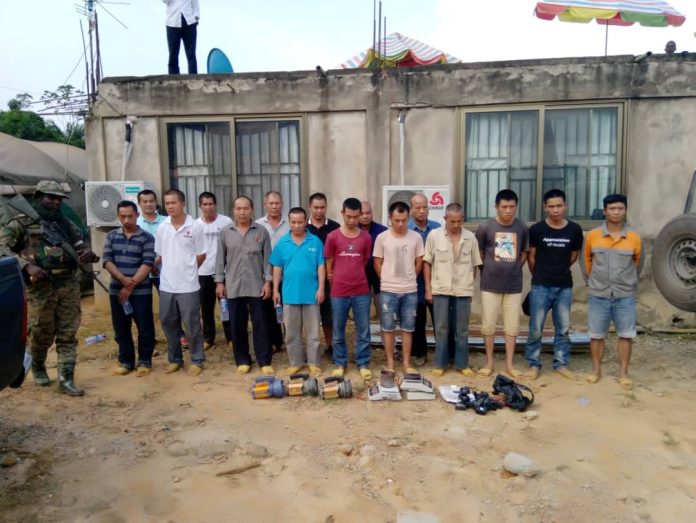 Fifty suspected illegal miners in the Western and Eastern regions have been arrested in various operations conducted over the past week, according to Operation Vanguard.

On Saturday, 13 July 2019, Op VANGUARD personnel in the Western region apprehended 16 suspected Chinese illegal miners in Enchi Kwahu in the Aowin District together with five excavators they have been using in their operations.

The 34 other suspected illegal miners were arrested in the East Akim Municipality in the Eastern region on Friday. The suspects, who were made up of both locals and foreigners were apprehended in the general area of Asiakwa.

Nine of the suspects who were locals were handed over to civil police at Kibi for prosecution while the others – 16 Chinese, 22 Guinean and three Burkinabe nationals and the five excavators have been handed over to IMCIM for further action.

Though the Taskforce has been receiving assistance through tip-offs from some locals, others have also resorted to providing safe havens for illegal miners, a statement said. These illegal miners have rented accommodations within various areas where galamsey is rampant and are wreaking havoc on our water bodies and forests. Op VANGUARD is therefore calling on the traditional leadership and locals to help flash out these unlicensed operators and their collaborators.

In other operations conducted from VANGUARD’s Forward Operating Base (FOB) in the Central Region a total of 94 Changfan branded water pumping machines were destroyed.

Akufo-Addo jets off to Germany August 22