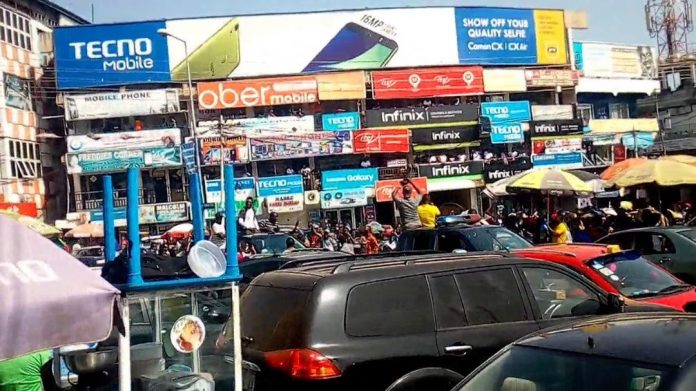 At least six persons have been arrested after several shops belonging to foreign retailers were locked up in a dawn operation by some rampaging Ghanaian traders Monday.

Police in Nima were called to a chaotic Tip Toe Lane, a location near the Kwame Nkrumah Circle as the angry members of the Ghana Union of Traders Association (GUTA) evicted the foreign retailers from their shops.

It is gathered that a number of persons have also sustained various degrees of injuries in the ensuing melee. Police have since been deployed to the scene to prevent reprisal or further attacks.

The Ghanaian traders had issued an ultimatum to government to enforce laws that bar foreigners from engaging in retail business.

Ghanaians claim that foreign retailers (referring to Nigerians) violated section 27 of the Ghana Investment Promotion Centre (GIPC) Act 865, which stipulates that “the sale of goods or provision of services in a market, petty trading or hawking or selling of goods in a stall at any place”, must be reserved only for Ghanaian citizens.

However, many believe that the action by was a response to the decision by the Nigerian government to close its borders.

GUTA stated that the closure of Nigeria’s trade borders with its neighbours is against the Economic Community of West African States (ECOWAS) treaties.

“We will still lock up the shops. We gave them enough time to pack out and the time is now”, a furious GUTA member told reporters at the scene.

“Why have they shutdown their borders?” another quizzed. “They are enforcing their laws so we have to enforce ours too”, he added.

Nigeria is the latest African nation to close its borders, following similar actions by Kenya, Rwanda and Sudan in recent months.

For some experts, the border closures of Nigeria are a slap in the face for the continent’s integration efforts.

Experts have warned the situation is likely to damage the African Continental Free Trade Area Agreement (AfCFTA), which has the potential to be the world’s largest free trade zone, even surpassing the World Trade Organization, established in 1995.

Foreign exporters in the region are counting their losses as countries within the ECOWAS sub-region have started rejecting Nigerian goods.

According to the exporters, the move is gradually crippling their businesses.

During an interview with Vanguard Maritime Report, Chief Executive Officer of Multi-mix Academy, an export-orientated institution, Dr Obiora Madu, disclosed that Nigerian exports within the ECOWAS region are decreasing due to the border closure.

He said: “It is definitely impacting negatively on the economy as the exports done within the ECOWAS region and our neighboring countries are now in decrease. These countries that benefit from the open border, since we have closed it, even though we used to export to them before, you don’t expect to get the level of cooperation that we are getting before because they are hit hard by these closed borders.”

“The unilateral closure of the Nigeria border since August is a very worrying development for the growth of free trade in the ECOWAS sub-region. One can understand the harmful effects of the unbridled smuggling of goods on the growth of local production. But it is problematic that sub-regional economic activity and trade should suffer because of domestic institutional weaknesses.”

“Nigeria must invest in strengthening its institutions and systems that are responsible for the importation of illegal or prohibited goods. The total closure especially the Benin border is having a toll on many SMEs especially in Togo, Ghana and Cote d’Ivoire that rely on inter-country trade for survival… I want to appeal to Nigeria to open up its borders so that economic activities can resume”, Mahama said while delivering the 7th Real News Magazine Anniversary Lecture in Lagos Nigeria.

258 young entrepreneurs apply to be amplified