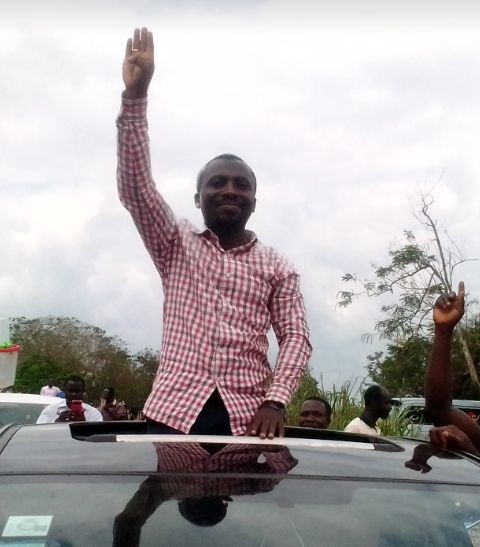 This was after a suit challenging Dr. Simon Karikari’s candidature was dismissed by the Kodie District Court in Kumasi on Friday, October 2, Dailymailgh.com can report.

The court presided over by H/W Ms. Naomi Akyiano also ordered the plaintiff, Stephen Kwaku Boah, to pay ¢5,000, as cost for damages for the defendant.

It was a charged atmosphere as supporters of the defendant, who had besieged the court premises, went on spontaneous wild jubilation.

“I am from this town and I have been voting since 1992 but for the past 10 years, we have seen nothing from the current MP. So this time around we are going to canvass for him and the President. We are voting against the MP this time around”, one of the supporters told Dailymailgh.com amid tears.

The plaintiff, who is also the Constituency Secretary of the ruling New Patriotic Party on Saturday, September 26, brought a case against the defendant, claiming that he could not be a candidate since he was not a resident of Tabuom, a community in the Constituency.

The plaintiff further prayed the court to prevent the candidate from filing or receiving nomination forms after he allegedly provided wrong information to the Electoral Commission during the just ended voters’ registration exercise.

“Fortunately for us, it was clear that he lived there and the court ruled in favour of my client”, Counsel for the defendant, Clement Marfo told Dailymailgh.com adding that: “He stands the chance to contest as an independent candidate in the constituency”.

Located in the Ashanti Region, the Afigya Kwabre South seat is traditionally occupied by the ruling NPP, but residents say enough has not been done to address their challenges.

But Dr. Simon Karikari, who is the CEO of Nkwa Boafo Herbal Clinic, says he will work hard to reverse the trend when he is elected as MP for the area.

“People planned evil against me but God has spoken. I can assure everyone that I will be the next MP for Afigya Kwabre South.

“A lot of [NPP] elders have called me to step down but to be honest, because of the love Nana Akufo-Addo and the love of Afigya Kwabre South this will not help; I am ready to unseat Owuraku and I know God will make it happen on December 7″, he said.