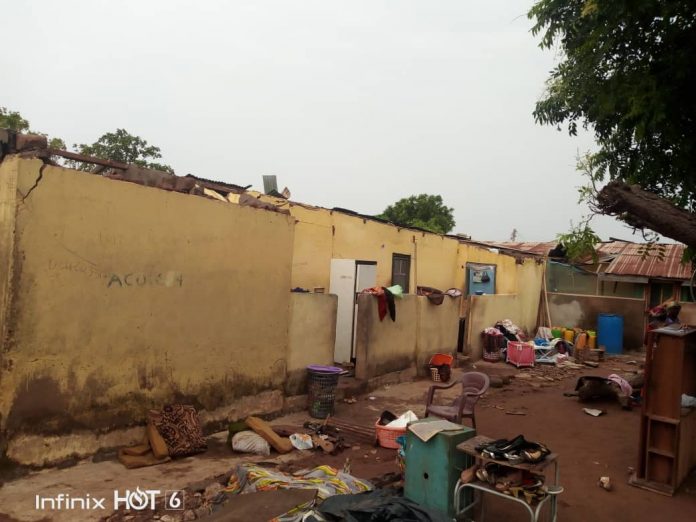 Heavy rains combined with strong winds have left hundreds displaced at Akrobi in the Bono Region, dailymailgh.com can report.

The rain which lasted for several hours Sunday night also destroyed properties worth thousands of Cedis.

More than 10 houses collapsed completely while electrical installations in the area were also affected during the storm.

A local basic school was also not spared as its roofs were ripped off, worsening the already appalling infrastructure.

When our correspondent in the Bono Region visited the community Tuesday morning affected residents were yet to receive support from the National Disaster Management Organization (NADMO) and other relevant authorities.

Some victims who spoke to our correspondent reveal they had to seek shelter from friends and relatives as they count their loss.

“My building has collapsed. We are helpless now. All our belongings are soaked in rain. Our hope is that authorities will come to our aid,” 47-year-old Auntie Mansa told DailyMail Gh’s Bono Regional Correspondent.

Assembly member for the area, John Anye Kwaku observed that the destruction caused by the rainstorm has been severe because there were no wind breakers in the community and also most of the houses affected were old and weak.

He said his outfit is yet to contact the Wenchi Municipal Assembly for support.