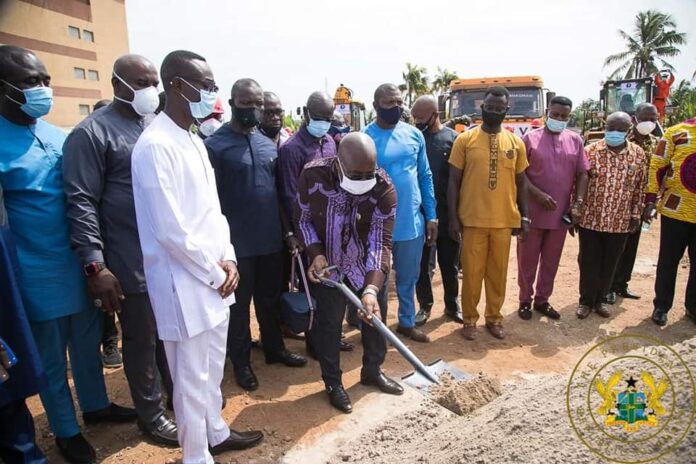 President Akufo-Addo has cut the sod for the construction of multiple health facilities in the Greater Accra Region. The projects are a Maternity/Gynaecological Centre, Nephrology and Kidney Transplant Centre, at the Korle Teaching Hosptial, and the reconstruction of the La General Hospital.

Speaking at the sod-cutting ceremony for the construction of a Maternity/ Gynaecological Centre and Nephrology and Kidney Transplant Centre, at Korle- Bu Teaching Hosptial, President Akufo-Addo said the completion of the construction works will significantly reduce maternal and neonatal mortality rates in the country.

“Government has secured an amount of one hundred and forty five million, two hundred and twenty thousand Euros (€145,220,00.00) from Standard Chartered Bank to cover the cost of the projects,” President Akufo-Addo said.

“Indeed, upon completion, the Centre will be the first public facility to deliver in vitro fertilization (IVF) services in the country,” the President added.

Reconstruction of the La General Hospital

At the sod cutting ceremony for the reconstruction of the La General Hospital, President Akufo-Addo, observed that the redevelopment project has been occasioned by a report from the Ghana Health Service (GHS), which indicated that the five story structure of the hospital was no longer fit for purpose.

“This redevelopment project is being financed by a credit facility from the Standard Chartered Bank of the United Kingdom, with an export credit guaranteed from *Syno Shore* from the Peoples Republic of China to the tune of sixty eight million Euros (€68,000,000.00) with an insurance cover of three million, eight hundred and sixty thousand Euros,” President Akufo-Addo said.

“Upon completion, it will be transformed into a one hundred and sixty (160) bed facility. It will be fitted with; an out-patient department, in patient wards, maternal and neonatal services, surgical unit with four theatres, accident and emergency department, public health department, pharmacy unit, laboratory, administration, imaging area with CT scan, x ray room, ultrasound, flouroscopy, mammography units, physiotherapy unit and a mortuary,” President Akufo-Addo added.

The Minister for Health, Kwaku Agyeman-Manu in his statement noted that with the development of hospitals all over the country, the phenomenon of health workers seeking to change their postings from cities outside Accra, Kumasi, among others will no longer be entertained.

“The biggest challenge facing the Health Ministry is the reluctance of health workers to serve in facilities outside the big cities of Accra, Kumasi and to some extent, Takoradi. Let me serve notice that this phenomenon will no longer be countenanced as the country stands the risk of loosing out on the achievement of the much talked about ‘universal health coverage’” the Health Minister stated.

The Korle Teaching Hosptial, project will be constructed by HEDEBI JV in partnership with Rizzani de Eocher, Bergamo and Hospital Engineering Gmbh, and it is expected to be completed within three (3) years.

Poly Chanda Overseas Engineering Company Limited will be executing the reconstruction of the La General Hospital.