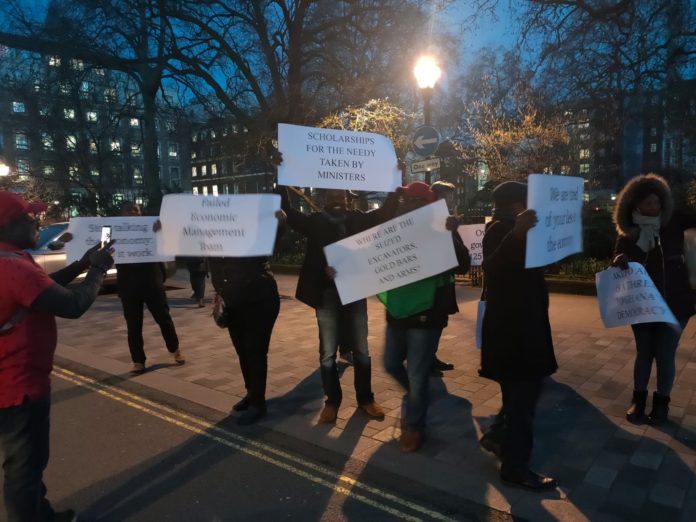 In a rare show of unity against the government of Mr Akufo-Addo in London, Ghanaians from all walks of life descended on St James Square and launched one of the most vociferous diaspora demonstrations against a president in the history of Ghana as the President was smuggled by Metropolitan Police Officers into Chatham House for an event he was scheduled to speak at.

The protestors, numbering about 100, shouted and projected make-shift placards with messages such as, “Akufo Addo is Mobutu Incarnate”, “Nana Addo is a Corruption expert”, “Nana is a Galamsey King pin”, “stop destroying the environment, NPP”, “stop rigging the election”, “Ghana needs rule of law, not rule of men”, “125 Ministers is a rule of family and friends” and many others.

A large number of the protesters identified themselves as members of the ruling NPP who are disappointed at the leadership of Nana Akufo-Addo. Many of them say they come from the Galamsey affected areas and feel that their party has changed considerably since the Kufuor era when Ghanaians from any part of the country could be cabinet ministers.

“Today, you only need to be a member of the President’s family to have a brain” one Felix Hamilton said. He was supported by another angry protester Issah Ayoma, who said he is related to the late Chairman Adams Mahama of the Upper East region. They screamed angry chants at one Kweku Nkansa who walked past into Chatham House.

The demonstration was loud. One European passerby noted that the St James Square area is usually quiet, which is why the protesters attracted such high levels of public attention with random tooting of car horns, even on far off streets. Nearby residents, some in pyjamas, walked closer to the charged crowd and took pictures of them.

At a point a scuffle broke out when the NPP women organiser who joined a queue of people entering the venue with Mr Nkansah charged on Mr Ayoma and slapped him saying in Twi, “I will beat you up like my own child if you try to disgrace my Chairman like that.” They were separated by a security officer who reportedly travelling with the President.

What remains to be seen is if President Akufo Addo will feel the protesters’ anger and listen to their issues on corruption, Galamsey, nepotism and the rigging allegations. For now, it does not appear so.

By Kingsley Lakle in London

New media is misrepresenting women in Africa: what feminists can do