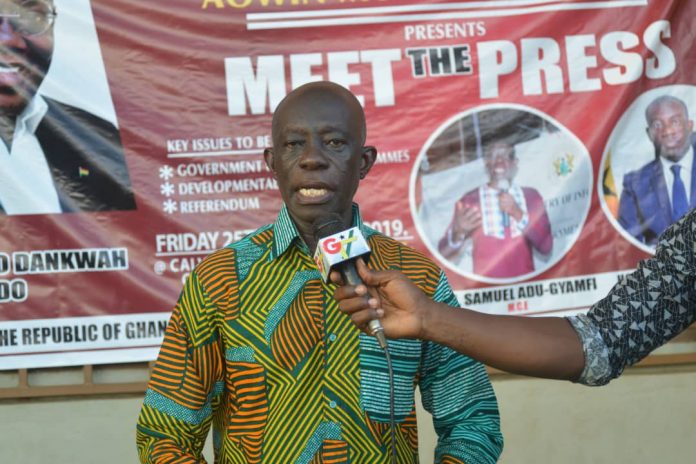 The Aowin Municipality located in the newly created Western North Region is to get Regional Feeder road office and two staff bungalows that would be put up for the Regional Feeder Road Engineer and its staff.

This comes as a result of the creation of Western North Region by the Akufo-Addo-government. Sefwi Wiawso is the regional capital for the region but Government has assured to distribute the offices evenly to some big towns in the region.

This was disclosed by the Municipal Chief Executive (MCE) for Aowin, Mr. Samuel Adu-Gyamfi during the “Meet The Press Series” held in Enchi.

Mr. Adu-Gyamfi said, the government as part of efforts to ensure transparency and accountability in the governance process and to also educate the general public on key government policies and programmes shortly after assuming office in the 2017 directed Metropolitan, Municipal and Districts Assemblies across the country to periodically organize Town Hall Meetings in their respective areas of jurisdictions.

About 69 students at various tertiary institutions in the Aowin Municipality have benefitted from government scholarship whilst over 1200 students from first year to third year of Nana Brentu Senior High Technical are also benefitting from free senior high education programme.

“Over 1,230 students from level 100-300 of Enchi College of Education are benefitting from teacher trainee allowances”, he said.

Mr. Adu-Gyamfi said government has expanded livelihood empowerment against poverty programme in the country. “Beneficiaries of the LEAP programme in the Aowin Municipality have increased from 493 to 1,698. An increase of 1,205 beneficiaries”, he disclosed.

The MCE seized the opportunity to talk about forth coming referendum on the elections of Metropolitan, Municipal and District Chief Executives (MMDCEs) and appealed to the general public to vote massively to attain the require percentage to amend the entrenched clause in the constitution come December 17th.

Four more for Nana; we’re better off under you – Assembly...