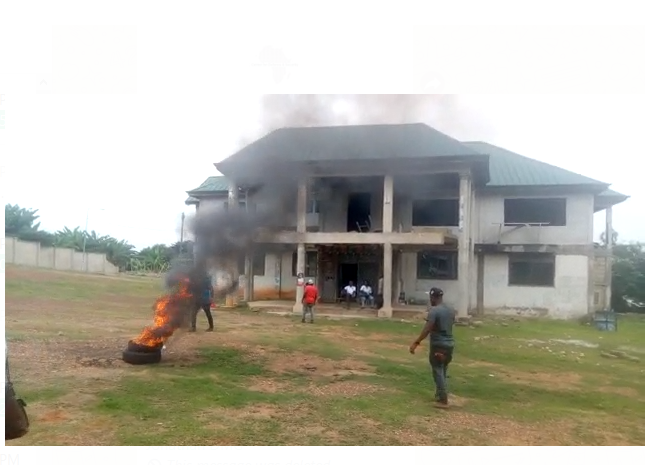 Some disgruntled supporters of Masawud Mubarick—a parliamentary aspirant in the Asawase constituency, for the second time set bonfires at the Ashanti Regional NDC party office Wednesday.

This was in protest of a decision by the party to disqualify Mr Mubarick from contesting the parliamentary elections.

A statement signed Tuesday by General Secretary of the party, Johnson Asiedu Nketiah, announced the disqualification of the aspirant and declared incumbent MP, Muntaka Mubarak to contest unopposed.

“By the decision, Hon. Muntaka Mubarak goes unopposed and for that matter stands elected as the parliamentary candidate for the Asawase constituency,” the General Secretary of the Umbrella family Asiedu Nketiah said.

But supporters of Mubarick who felt discontent over the pronouncement besieged the party’s regional office burning tyres amid chants.

In a video obtained by Dailymailgh.com, the angry protesters were spotted around a building which houses party executives in the region as one of them is heard shouting, “we won’t vote”, “we won’t vote”.

The angry protesters say the party’s leadership erred in the disqualification of their aspirant adding that the decision would jeopardize their chances of securing the Asawase seat.

“I think this news for me is an embarrassment to the democracy we are practising in Ghana. The whole issue is very simple. It is a debate between letting the delegates of Asawase exercise their democratic right and imposing somebody on the people of Asawase. We saw it in the beginning”, a delegate told reporters who had gathered at Mr Mubarick’s premises earlier before the incident.

Another person threatened to vote against Muntaka

“We will vote skirt and blouse. If the national executives wanted the party to win massively, they would have sought our opinion. They would not have imposed anyone on us.”

The National Democratic Congress (NDC) has given the incumbent Member of Parliament for the Asawase Constituency, Muntaka Mohammed, the green light to represent the party in the 2020 parliamentary election.

This follows the recommendation of the party’s Committee for settlement of outstanding disputes (the Doe Adjaho Committee) that handled petitions into the selection of NDC parliamentary candidates for next year’s general elections.

Why are we here?

A disgruntled Masawudu Mubarick had expressed concern that the posturing of some party executives indicates that they do not want him to contest, Muntaka Mubarak, who is the Minority Chief Whip in Parliament.

Several attempts to file his nomination forms had yielded no results.

His nomination forms were rejected at the constituency and regional level because of some pending disciplinary action against him.

The Doe-Adjaho led committee later pronounced his disqualification from the race.

Ghana ranked 1st in West Africa in RMB’s ‘Where to Invest...