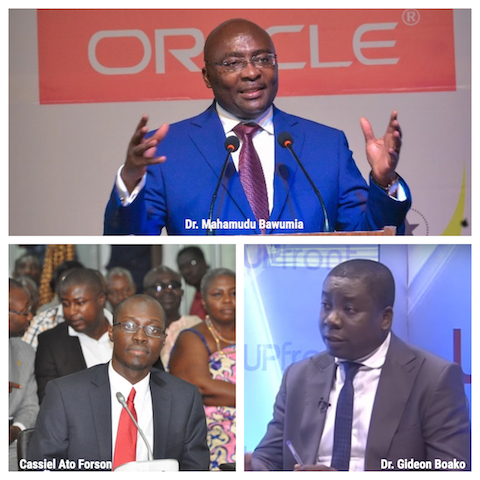 So once again, the NDC and their surrogates got themselves hoodwinked by Ato-Forson into believing that the Vice President, Dr. Mahamudu Bawumia mentioned figures in his presentation at the Economic Management Team (EMT) Town Hall Meeting that were inaccurate.

Just a little bit of education here. In the Vice President’s presentation fiscal deficit figures were mentioned basically in paragraphs 6, 20, and 21 (under Fig. 8). In paragraph 6 under the heading Public Finances Prior to 2017, the Vice President sort to paint the picture of Ghana’s fiscal deficit figures as they were from 2012 to 2016 as the NPP then used and mentioned when in opposition.

It made sense then because he was trying to show how bad things were as the NPP spoke about them to win power. Dr. Bawumia mentioned in paragraph 6 and I quote:

So clearly, here you notice that because the rebasing occurred in 2018 and he had to give the 2018 figure in the new series (rebased) he did not use the old (non-rebased series) for 2016 as he mentioned in paragraph 6. This is intellectual honesty and consistency. He did not use a rebased figure for 2018 and a non-rebased figure in 2016. He was very professional and consistent.

Even in his attempt to lie about the figure, he quoted the wrong one because in the excel sheet on the Ministry’s website the figure is 8.7% and not 7.8% as quoted by the lying Ato-Forson.

The actual (not provisional) non-rebased fiscal deficit figure for 2016 is clearly provided for in the mid-year budget of 2017, as well as the 2018 and 2019 budgets. And in all of them the figure mentioned is 9.3%, consistent with what Dr. Bawumia mentioned. For example:

“Mr. Speaker, on the fiscal front, updated information shows that the end-2016 fiscal deficit was worse than previously estimated, at 9.3 percent of GDP compared to the provisional figure of 8.7 percent of GDP on cash basis at the time of presenting the 2017 Budget.”

“Mr. Speaker, it is important to remember what it was in order to appreciate the work that has been done to fix the mess: High Fiscal Deficits reaching 9.3 percent of GDP in 2016” –

You can do all the propaganda with insults and lies but the FactsCheck will expose you.

Over 300 aviation workers in Ghana sent home over COVID