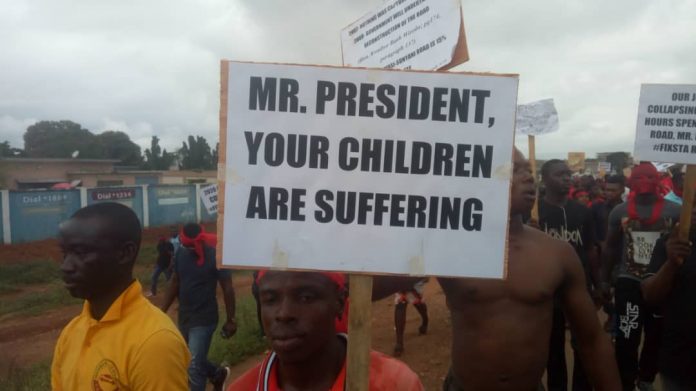 A campaign for motorable roads has begun in the Atwima Nwabiagya South District of the Ashanti Region.

Residents in the area on Thursday protested to express their frustrations at failed promises by the Akufo-Addo government to complete road projects along the Kumasi-Sunyani Highway.

Initiated by the former Kufuor administration, a dual carriage single-lane stretch is part of the Sofoline Interchange Project.

But work has since stalled though succeeding Attah Mills and John Mahama government partly completed the project.

Red-clad protesters occupied sections of the dilapidated roads as they marched through the Central Business District of Atwima Abuakwa.

Police had tough time controlling the huge crowd to motorists transiting through the community.

43-year-old Afia Serwaa, a resident of Abuakwa-Tanoso said they endure persistent heavy traffic on the bad surface, riddled with potholes due to stalled works on the road.

“I must say this is a terrible road. It appears we have been neglected. Many drivers cannot ply the road during rush hour traffic. The government should help us”, she said.

“It seems the sector Minister is asleep. He has been making several promises yet the road has not been fixed. He needs to be axed”, another angry protester, Kwame Adu who demanded the immediate resignation of the Minister of Roads and Highways, Kwasi Amoako Atta.

Horrors of child prostitution in Ghana