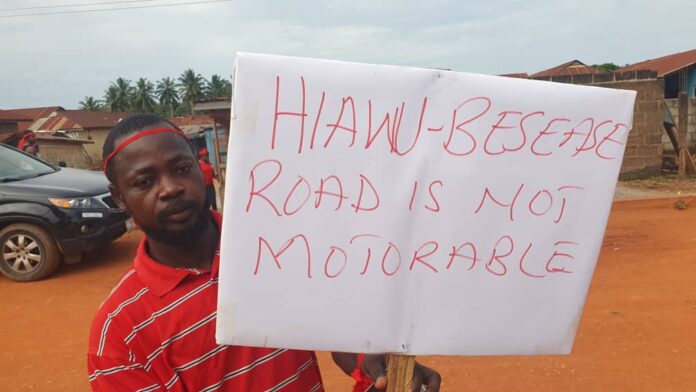 Residents living along the Sepaase-Ntensere road in the Atwima Nwabiagya South Municipality of the Ashanti Region on Tuesday, June 28, staged a protest over the deplorable state of that stretch.

The residents say the contractor working on the road abandoned work just days after the 2020 polls, a situation that is affecting their livelihoods.

Clad in red armbands and attire, the residents, numbering about 300 marched through the streets as they chanted war songs to draw the government’s attention about their plight.

The protesters displayed placards with agitated inscriptions such as “Hiawu-Besease road is not motorable,” “Hon MCE come to our aid,” “Enough is enough,” “They don’t care about us” and many others.

They later presented a petition to the local assembly after the nearly four-hour protest. The Municipal Coordinating Director, Mr I.K Acheampong, who received the petition on behalf of the Assembly assured that their petition would be submitted to authorities for redress.

Personnel from the Ghana Police Service however prevented a near clash when the protesters were blocked by some youth of Ahodwo.

It was later gathered that an earlier conflict between the youth of Besease and Ahodwo early this year escalated at a funeral ground.The police said investigations have been launched into the incident.