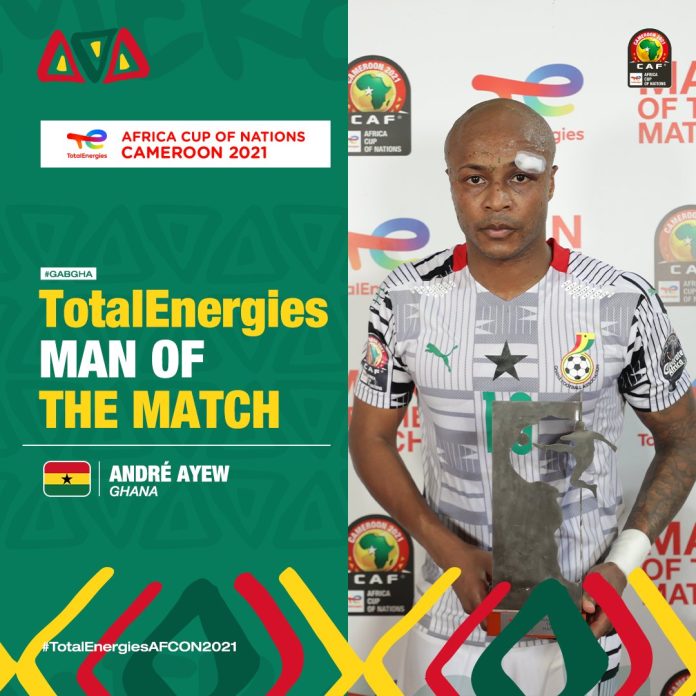 Black Stars captain Andre Ayew was named Man-Of-The-Match in Ghana’s heartbreaking 1-1 draw against the Panthers of Gabon on Friday evening.

Ayew was a delight to watch throughout the game and entertained fans at the stadium with a great display for Ghana against Gabon in the ongoing Africa Cup of Nations tournament in Cameroon.

Ghana’s Black Stars AFCON hopes hands on a thread after a heartbreaking 1-1 draw against the Panthers of Gabon on Friday evening.

Ayew produced a moment of magic as he scored a scorcher in the first half to help Ghana bounce back from opening day defeat to Morocco with an important win to get back on track with their quest to win their fifth AFCON trophy.

The Gabonese started the game as wounded lions and pushed Ghana back into their own backyard.

The Panthers came close to scoring the opener after a defensive mixup but Strasbourg defender Alexander Djiku produced a masterclass defending to block the close range shot.

Eighteen minutes later after the Kickoff, Arsenal star Thomas Partey delivered a brilliant through pass to Andre Ayew who turned beautifully to unleash a sumptuous strike to break the deadlock and put Ghana 1-0 up.

Gabon came close to equalizing but Daniel Amartey headed the ball out of danger as the first half ended 1-0 to the Stars.

The second half was a balanced game with Gabon throwing everything at Ghana searching for the equalizer.

Right-back Andy Yiadom was called into action and defended very well by throwing his body to block the Gabonese every attempt at goal.

Sunstitite, Joseph Paintsil had a brilliant chance to set up either Partey or Jordan Ayew but he went solo and missed the chance.

Few minutes later, Ayew failed to play a simple pass to Paintsil who was through on goal but rather drew a foul which was wasted by Jordan.

Gabon scored late in the game to to break the Stars heart Jim Allevinah.

Ghana must beat Comoros on Tuesday and hope for other results to go in their favour to be able to qualify for the knockout stages.

Exclusive: Ghana target Gakpo out of Netherlands-Cyprus qualifier due to malaria