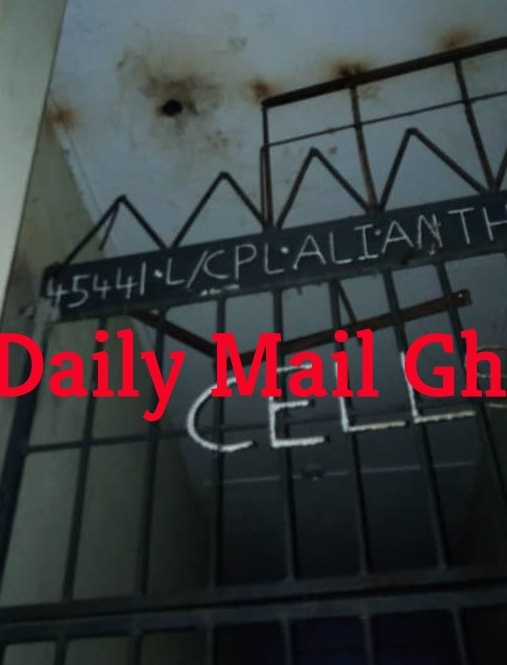 Three awaiting trial prisoners are on the run after escaping from police custody, Jachie police said on Sunday.

The escapees include 18-year-old Emmanuel Danso, a third-year day student of Osei Yaw Adutwum Senior High School at Jachie in the Bosomtwe District of the Ashanti Region.

He was arrested and charged for allegedly assaulting a first-year student of the school.

Police say two others who were detained for stealing are also at large. They have been identified as 27-year-old, Inusah Mohammud and Akwasi Attah, aged 16.

Pictures obtained by Dailymailgh.com show how metal parts of the cell door had been badly damaged after the suspects bolted through a ceiling. Police say an officer who was on duty when the incident happened at about 16:00 GMT has also been questioned.

Police sources tell Dailymailgh.com that the suspects had asked the yet-to-be-identified officer to buy them food.

“That on his return, they [the suspects] escaped through the ceiling,” a police source explained to Dailymailgh.com adding that “a search has been mounted for their arrest”.

Incidents of jailbreak appear to be on the rise in the Ashanti Region.

On April 15, 2019, a teenager held for his involvement in recent violent attacks at Ahwiaa in the Ashanti Region, was recaptured by police after he attempted to escape from police cells.

Police named the fugitive as Hakeem Aziz, who was arrested at Ahwiaa after he led armed gang to unleash violence on residents on Friday, April 5, 2019.

He was consequently remanded by a circuit court in Juaben.

Another robbery suspect is also facing a Kumasi High Court after he escaped from custody at the Kumasi Central Prison.

Some prison officers were named to have aided his escape from lawful custody.