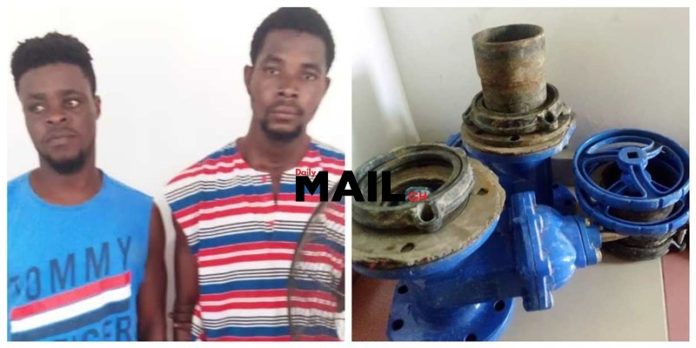 Two persons have been arrested by police in the Central Region after they were accused of stealing chamber valves belonging to the Ghana Water Company Limited (GWCL).

The suspects were arrested just before midnight on Wednesday, May 20, 2020 at Ota City, a vicinity in Kasoa in the Awutu Senya East Municipality.

The two have been named as Emmanuel Kwaku Abeka, 22, and Ramzh Kwasi Opare , 27.

They were arrested after the Assemblyman for the area, Jones Darko Kwarteng, who became suspicious of their presence reported to the police.

“So the two have been detained. Investigations have begun and they will be arraigned before court tomorrow Friday,” the Police Chief told newsmen.

Many communities in the national capital, Accra have been grappling with water outages in recent times. The GWCL has attributed the situation to increased water and equipment theft in affected communities.

In April 2019 for instance, three male-adults were jailed after they were caught stealing water meters in the Ashanti Region.

Razak Mohammed, 24, Ali Zakari, 27, and Suleman Mumuni, 20, were arrested at different locations within the Kumasi metropolis, and after police investigations, charged with the offences of stealing and causing damage to government property.

They were convicted on their own pleas and given sentences ranging from nine months to a year in hard labour by separate courts.