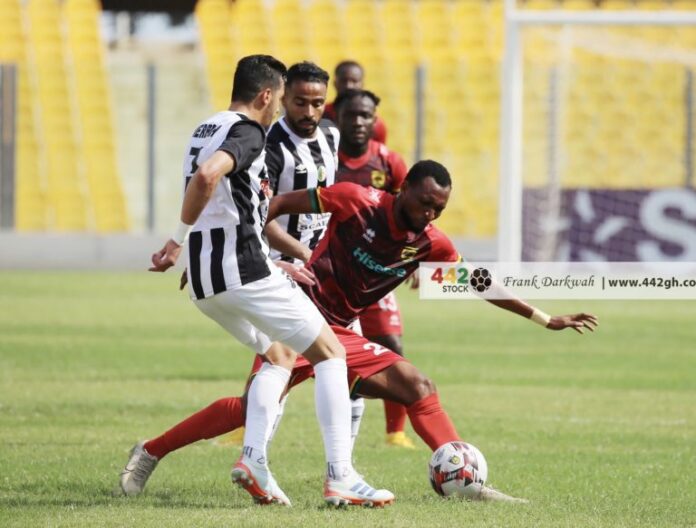 The Porcupines took a deserving lead in the 68th minute after starman Kwame Poku converted a pass from Emmanuel Gyamfi in the penalty box into a goal with a cool finish to make it 1-0.

The Black Eagles who had been tactically disciplined team until Kotoko’s goal starting playing well and releasing a counter attacking play to catch the Porcupines on the break any time they pushed forward.

With only 20 minutes to go, the Algerians upped their and begun to play from the wings, after introducing Mohammed El Amine Amuora into the game and started hurting the home team.

Asante Kotoko were in search of a second goal,but Setif caught them at the back with a sweet counter attacking play on the left flank, before switching play to the right to serve Amuora who headed home beating Razak Abalora in goal.

After the equalizer, Setif pushed to get the second goal with only 10 minutes of play left with another counter attack play with Amoura in the thick of affairs, the young striker dribbled past two Kotoko defenders before releasing Kendouci Mohammed to score the match winner.

Kotoko were awarded a spot kick but Guinean import Naby Keita missed the chance to level for the home team.

The Algerians took over the midfield afterwards and dominated the remaining minutes of the match.

The Porcupine Warriors will travel to Algeria with a 1-2 goal deficit for the second leg next weekend.