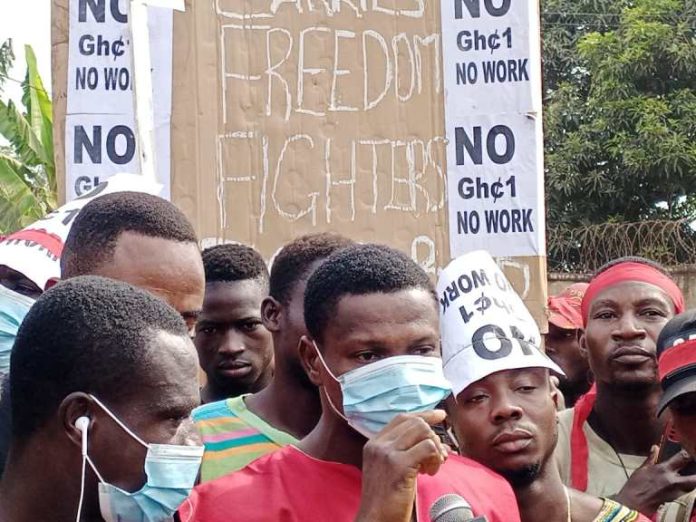 Cocoa carriers have launched a protest against the Cocoa Marketing Company (CMC) and its partner labour suppliers after a renewed wage-per-bag of cocoa they cart was pegged at 0.82pesewas.

A communique widely shared online suggests the CMC has agreed to pay the carriers 0.82 pesewas per bag of cocoa beans they carry instead of the 0.65pesewas they currently receive.

But the workers, who have withdrawn their services at various CMC depots across the country over the development say they will not accept any amount less than the GH¢1 they are demanding.

“We just heard that they have suggested 82 pesewas at a meeting in Tema but we in Kumasi are saying that we will not work if we are not given 1 cedi. Workers in Kumasi, Tema, Takoradi will not accept 82 pesewas”, said Raymond Atanga, a spokesperson for the cocoa carriers in the Ashanti Region.

“We have also heard rumours that the supervisors have aligned with the foremen in Tema to engage new recruits and they will pay them 0.90pesewas”, he futher alleged adding: “What I want to tell COCOBOD management is that what they are trying to do is not the best”.

Cocoa carriers in Takoradi, Kumasi, and Tema embarked on a sit-down strike to demand wage increment and better conditions of service.

Thousands of bags of cocoa beans were left at the mercy of the weather on Wednesday at the various warehouses of COCOBOD in the Western and Ashanti regions as a result of the indefinite sit-down strike declared by the carriers.

There are fears that beans destined for export through Ghana’s main cocoa trading centres will be left to rot if officials fail to intervene.

Minority demands audit into payment for customers of collapsed Banks

Ghana’s Cedi is the world’s best-performing currency against U.S. dollar