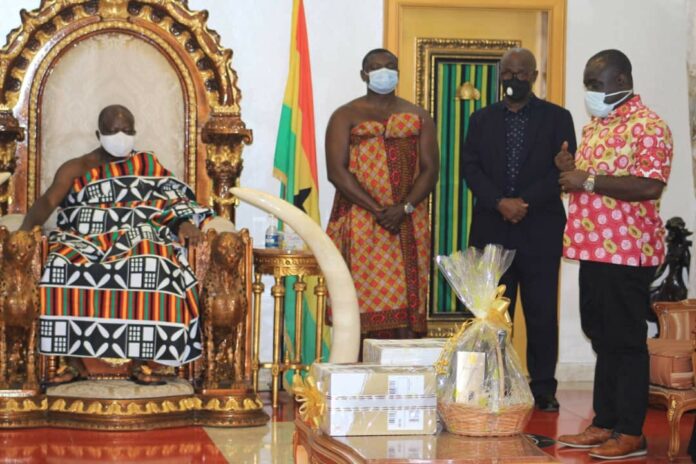 The King of Ashanti Kingdom, His Royal Majesty, Otumfuo Osei Tutu II, has told the Ministry of Transport to immediately conduct a Transport Impact Assessment (TIA) to determine the number of vehicles that must be allowed and imported into Ghana.

This exercise, he noted, should be done in collaboration with the Ministry of Roads and Highways to determine the number of vehicles that ply the various motorable road networks in the country.

The objective of this exercise, according to the King, is to do decongest the unnecessary traffic congestion on the various road networks of the country.

“There are so many cars being imported into the country. This critically demands or calls for a Transport Impact Assessment. If we are able to do this, we’ll be able to determine the number of vehicles that have been imported into the country as well as the number of vehicles that needed to ply our roads at any given time. How many kilometers of motorable road networks are there in Ghana that we are allowing so many vehicles to be imported? Everybody has a right to import a vehicle but there is the need to determine how many could ply our roads at any given time”, he noted.

He added “whiles that Ministry of Transport is conducting the Transport Impact Assessment, the Ministry of Roads and Highways will also be able to tell us the number of road networks that could be opened to accommodate these vehicles. All these affect the economy. We buy diesel or petrol and waste them in traffic. It is not good for us”.

Otumfuo Osei Tutu II made this submission on Tuesday, March 30, 2021, when the Minister for Transport, Hon. Kwaku Ofori Asiamah, paid a courtesy call on him at Manhyia, to ask for his blessings and to ask for permission to inspect the progress of work made on the expansion of the Kumasi Airport project which is ongoing.

Traffic Impact Assessment (TIA) is a technical analysis of traffic problems and safety issues relating to specific development. The chief objective of TIA report is to identify whether a particular development project will have an impact on the safety and efficiency of road networks.

In Ghana, traffic congestion is a major problem, especially, in the central business districts of the three major cities, resulting in massive delays and fuel wastage, decrease in productivity, reduction in sales, stress and money loss.

To the King, once a TIA is conducted, it will help address reduce the number of time vehicles spend on the road, increase productivity and save money.

Turning his attention to matters relating to the aviation industry, the King told the Transport Minister to probe the recent agitations by workers of GACL and resolve all related issues to enable Yaw Kwakwa operate in a peaceful environment.

To the King, Mr. Kwakwa has done a tremendous job at the GACL considering the huge debt he inherited and how he is servicing them, especially, the US$274million loan facility government procured to finance the construction of the Kotoka International Airport (KIA) Terminal 3.

“I don’t know why the workers are agitating but Yaw Kwakwa is doing very well. So, please investigate it and let me know the outcome. The workers’ agitations may be fueled by someone who perhaps, is interested in the position Kwakwa is occupying. If you follow all the things that workers Union are saying, you won’t be able to service the loan. The revenue GACL generates now goes into an Escrow Account to service this loan. If Kwakwa has embezzle some funds, he should be sacked but if he is working hard to service this loan and also lifting the image of Ghana high, he should be encouraged and supported to continue his work”, he noted.

Otumfuo commenting further lauded leadership of the GACL and that of GCAA for ensuring high aviation standards at the KIA, a feat which has culminate in the KIA winning being adjudged the 2019 Africa’s Best Airport by size and region with a passenger population of between two and five million as well as the 2020 Best Airport in terms of safety by the Airports Council International.

“I was delighted to hear about your superb safety records at KIA. Now Ghana is on top and this is what we have been yearning for over the years. Congratulations to Yaw Kwakwa and Charles Krakue. This achievement tells us that if we hard, Ghana progresses but if we relent on our efforts, Ghana fails and that is not good for us”, he advised.

The King also lauded government for upgrading the Tamale and Kumasi Airports to international status, noting that such a move will make air travelling much easier for travelers irrespective of where they are rather to travel long distances to Accra to board a flight to Europe and other parts of the world.

Concluding, Otumfuo appealed to government to ensure that the Kumasi Airport runaway is expanded to enable Boeing 373 to land at the Airport.

The Minister for Transport, Hon. Kwaku Ofori Asiamah, on his part, thanked the King for continuous support to government and assured him of complying with all the requests that he has made.

Commenting on the Kumasi Airport expansion project, Hon. Asiamah expressed happiness about the level of progress made so far but noted that the completion date has been rescheduled to 2022.

“Phase II include a terminal and terminal building and have added phase III which include the runaway and apron. So they are doing it at the same time. The phase II is supposed to be completed around October or November 2021, but because phase III has been added to it, the completion date has been rescheduled to 2022. I had fears that the novel coronavirus pandemic was going to impact negatively on the work but the contractor and consultant have done well to avoid we incurring project overrun cost”, he noted.

No compensation for encroachers

Hon. Asiamah commenting further appealed to the media to assist government in fighting private estate developers and individuals who have encroached on the Kumasi Airport lands. However, he cautioned that no developer who has encroached on the airport land will be compensated.

“Once you build on GACL lands, we will not pay any compensation package. Nobody will be compensated. And so, if you think you will come and build on GACL in order to be compensated, I’m sorry, not a pesewa will be paid to you and we have the full backing of the King too”, he stressed.

Touching on the Airport City Project, the Transport Minister explained that the project is a private-led project where interested parties will be given designs approved by the GACL to develop at their own cost.

“Getting to the end of the year, you will hear more about the Airport City Project. By that time, the feasibility studies would have been completed by the GACL”, he said.