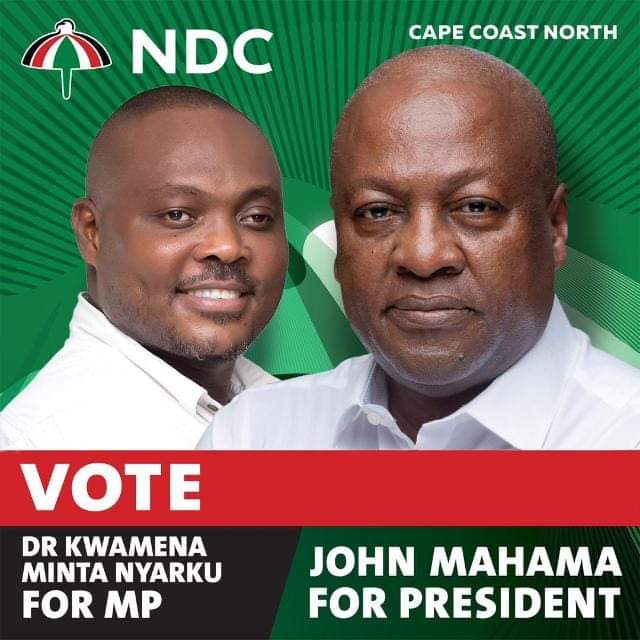 There is confusion in the Cape Coast North constituency of the National Democratic Congress (NDC) following the emergence of a fresh evidence of alleged double registration against their candidate, Kwamina Mintah Nyarku.

Nyarku, being the man at the center of the controversy, appears to have let the NDC down considering the close of nomination, with many accusing him of creating more problems for the party in an attempt to fulfill his personal ambition of becoming a Member of Parliament (MP) on the ticket of the umbrella family.

In spite of the challenge at hand, the NDC appears to have another candidate in the person of Kwabena Marfo, a news anchor with Despite Group of Companies.

Kwabena Marfo filed his nomination as INDEPENDENT CANDIDATE ready to step in and fill the void that will be created by Nyarku, should he be challenged again and in the process, barred from contesting the December 7, 2020 parliamentary polls.

Highly places sources familiar with the situation say the elephant family is lacing its boots to file a case against Nyarku and the NDC as well as the EC in the coming days.

The case is to challenge the legitimacy of Nyarku to contest the 2020 Parliamentary elections.

Nyarku has been given the green light to contest the December 7 Parliamentary polls on the ticket of the NDC. His voter’s ID card which was earlier withheld by the election management body has been released to him following a High Court order.

The NDC parliamentary candidate was challenged for providing wrong information on his residential address during the EC’s voter registration exercise in July, 2020.

The EC, in the process, withheld Nyarku’s voter’s ID card on the basis of providing false information on his residency which was against the electoral laws of the land, a situation which made it impossible for him to contest the Cape Coast North parliamentary seat.

By extension, he was barred from participating in any national elections for a period of five years. This was after the District Registration Review Committee found him culpable of committing the electoral offense.

What action did Nyarku take afterwards?

Nyarku not happy with the development challenged the decision of the election management body at the Cape Coast High Court. The Court presided over by Her Ladyship, Patience Mills Tetteh, dismissed his application and upheld the decision of the District Registration Review Committee.

Still not content with the decision of the Cape Coast High Court, Nyarku filed for a judicial review at a separate Human Rights Court in Accra. The High Court in Accra presided over by Justice Stephen Oppong, after reviewing the case, issued an order of mandamus, compelling the EC to register Nyarku and also release his voter’s ID card to him. This was on the basis that he had not been barred from registering as a voter by any court of the land.

Acting on the orders of the Human Rights Court, the Central Regional EC released Nyarku’s voter’s ID card to him but he rejected it on grounds that his name was still in the exception list of the EC which meant that even though he had his card, he could not vote which indirectly bars him from contesting the Cape Coast North parliamentary seat on the ticket of the NDC.

He therefore demanded that a new voter’s ID be issued to him, a request which was granted. He was then made to register during the EC’s re-opening of the Voters registration exercise at the Cape Coast North District office of the EC on October 1, 2020.

During the registration process, Mr. Nyarku was challenged a second time by the Cape Coast North NPP on the basis that the day’s registration exercise was strictly purposed for persons who have turned 18 years and others who were unable to register during the month-long exercise by the EC.

According to the NPP, Mr. Nyarku did not qualify to be registered since he had already been registered and issued a voter’s ID card. The elephant family also insisted that the NDC parliamentary candidate had changed his ordinary residence from Nkanfoa which earlier led to his registration being challenged the first time to Pedu.

Having successfully been registered and a new voter’s ID card issued to him, fresh evidence emerging from Cape Coast North indicate that Mr. Nyarku and the NDC may be dragged back to court by the NPP to challenge his legitimacy of contesting the parliamentary seat.

Inside sources say the NPP has ample evidence against Mr. Nyarku to the effect that he engaged in double registration at different locations. Should the NPP be able to file this case and back their claim with enough evidence, Mr. Nyarku’s hope of contesting the Cape Coast North parliamentary seat will be dashed.

Is the NDC aware of this new development?

Our sources within the NDC say, the leadership of the party from the Cape Coast North constituency to the Region and National are all aware of this new development and are very much disappointed in Mr. Nyarku.

What has angered them the more, is the fact that filing of nomination has closed which means that should Mr. Nyarku be disqualified or barred by a Court from constesting the parliamentary polls, the NDC will have no candidate to represent it.

Meanwhile, there were more people on their waiting list to step in and file to contest seat on the ticket of the part prior to the closing of nomination on Friday, October 10, 2020.

Do the NDC have a plan B?

The leadership of the NDC with the consent of their flag bearer, John Dramani Mahama, not too sure their candidate, Nyarku, will survive any court ruling, given that the fresh evidence emerging does not support him, quickly triggered their plan B.

Deep throat sources within the NDC say, Kwabena Marfo, a news anchor with Despite Group of companies, is their next candidate to bank their hopes on because of his popularity in the constituency. The decision to settle on Kwabena Marfo as a stop gap measure, was taken on Wednesday, October 7, 2020 at an emergency meeting held in Cape Coast.

For this plan to work effectively, Kwabena Marfo was made to register as an INDEPENDENT CANDIDATE. This is to position him to be on standby and step in to fill the void that will be created by Nyarku, should the NPP or any individual or body goes to court and challenge his legitimacy to the constent the Cape Coast North parliamentary seat and win.

Checks at the Cape Cape North District Electoral Commission has confirmed filing of nomination of Kwabena Marfo as INDEPENDENT CANDIDATE.

What is Kwabena Marfo saying?

Kwabena Marfo when contacted on the issue on Sunday, October 11, 2020, said he received several calls from the Cape Coast North constituency to contest the parliamentary polls as INDEPENDENT CANDIDATE. However, he did not give in to those demands.

When his attention was drawn to the fact that his name is among the list of those who have filed to contest the Cape Coast North parliamentary seat, he pleaded with the reporter to give him sometime to crosscheck the fact and get back to him. At the time of filing this report, Marfo has still not gotten in touch.