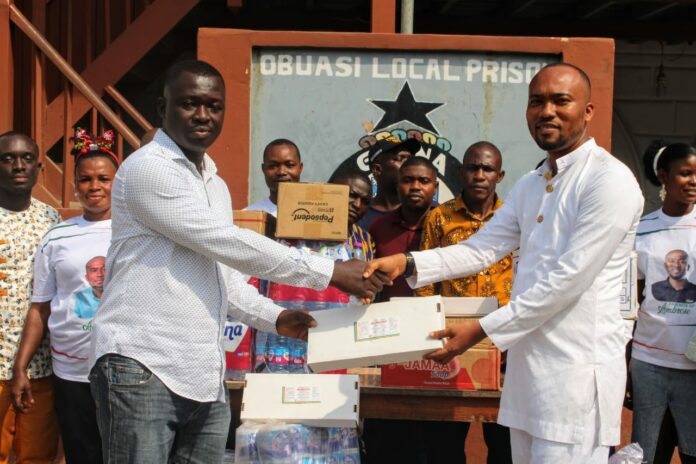 Stakeholders including parliament have been urged to join the call for the passage of the Community Service Sentencing Bill into law to decongest Ghana’s prisons.

An Obuasi-based youth activist Ambrose Edwin Nsarkoh who is leading the charge says the bill when passed into law, will not put pressure on the government’s meagre budget allocated for the welfare of inmates.

Mr Nsarkoh bemoaned the level of decongestion and inhumane conditions in the Prisons saying having an alternative sentencing regime to punish petty offenders without not necessarily putting them behind bars will help salvage the situation.

Nsarkoh made these remarks at a brief ceremony to donate items to inmates at the Obuasi Local Prisons in the Ashanti Region on New Year’s Day.

The items donated included bags of rice, detergents, dewormer, bottles of water, tinned tomatoes, and slippers among others.

The gesture was extended to senior citizens, widows, and the Abduallam Children’s home, all amounting to GH32,000. This was to show love to them and give them hope in the new year.

Superintendent Esther Ako Nunoo who received the items on behalf of the Obuasi Local Prisons lauded Mr Nsarkoh for the donation and appealed to well-meaning Ghanaians to support them.

She added that overcrowding has been a major challenge to them, especially during the Christmas break when the courts were on vacation. This she said has put pressure on their already limited space in the Prisons.

Supt Nunoo again revealed that the GH1.80p per inmate is woefully inadequate but stressed that donations from benevolent individuals and organisations have been supporting them to feed the inmates.

The Abduallam Children’s Home on its part praised the philanthropist for the kind gesture.

“He is one of us here at the orphanage and he has been very supportive”, said James Sundia, the Executive Director of the facility adding that such gestures “complement us as we raise responsible citizens for the country”.