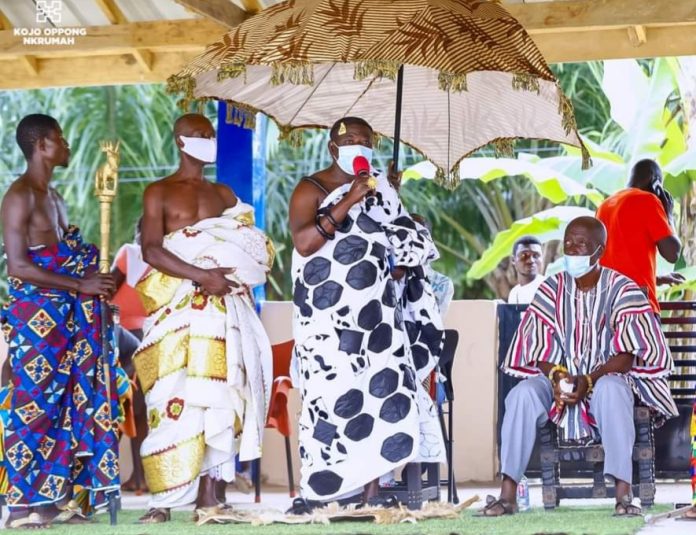 Obrempong Adarkwah Gyemerah II the chief of Bontodiase and his kings’ men have smoked the peace pipe with Akyemensa district assembly and other prominent Chiefs in Akyemansa district concerning the earmarked land for the construction of district hospital.

This occurred last week when the assembly headed by Paul Asamoah, DCE called for district security council meeting to address challenges and difficulties raised by Obrempong Adarkwah Gyemerah II about the demarcated land. After the meeting, all the pertinent issues raised by Obrempong and other chiefs were addressed fully and agreements were reached for the contractor to come to site for the commencement of the project.

Speaking to Ananse FM Morning Show programme dubbed ‘ME NAN NTI’ a day after the meeting at Akim Afosu, Obrempong Adarkwah Gyemerah II confirmed the meeting and various agreements and decisions. He said ‘now peace and understanding have been reached, parties have penned down their signatures already, occupants of the land will be compensated and contractor can start work’. ‘The chief also said he cannot block the project which is will to serve the entire district and thanked and commended the president and government for the agenda 111 initiative’.

The DCE Paul Asamoah who also spoke to the same radio station, thanked Obrempong Adarkwah Gyemerah II, other chiefs and Queenmothers, political leaders and various security officers for honouring the meeting. He also thanked Nananom for willingly given out the land for the project and promised them the right compensation will be paid to the occupants of the land. He also pledged government’s readiness and preparedness to complete the project on time for the people.

Opinion: The frailty of humanity and the need for God’s intervention