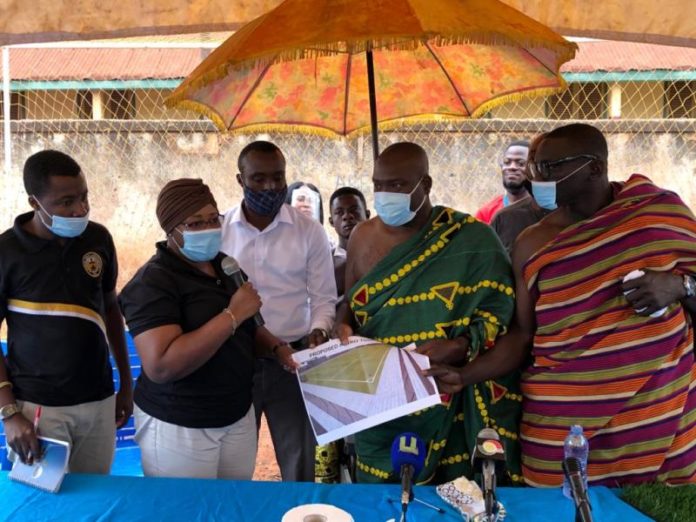 The Konadu Yiadom M/A Primary School park in Kumasi is set to be transformed into an Astroturf by the Ghana National Petroleum Commission (GNPC) Foundation.

The construction of the artificial park has been awarded to BLAG Ghana Limited.

Located in the Manhyia South Constituency, the edifice is expected to be completed in the next six months.

The construction of the facility was made possible following an appeal made by the Asantehene’s Lands Secretariat, headed by Otumfuo Apagyahene, Nana Owusu Afriyie IV.

Spearheaded by the Member of Parliament for the area, Dr. Matthew Opoku Prempeh, the project will add to the already built Astroturf at the popular Abbey’s Park and another which is being constructed at Dichemso.

Speaking at a brief event on Thursday, August 21, to start the project, the Head of Environment and Social Amenities at the GNPC Foundation, Loubaabat Habib urged constituents to offer maximum support to the contractor.

According to her the support is in response to a letter the GNPC Foundation received from the Asantehene’s Land Secretariat to convert the grassless pitch into an ultramodern artificial park.

Nana Kwaku Duah, the Kokosohene, who represented Otumfuo, lauded the Asantehene and Dr. Matthew Opoku Prempeh for working hard to make the facility a reality.

He also stated that a full standard football pitch with other modern amenities will be constructed at the place, and he called for total support for the project.

Eddie Dankwa of BLAG Ghana Limited, said the project will boast of floodlights, an artificial pitch and other modern amenities.

He indicated that a modern FIFA standard facility will be delivered to help beautify the place and also promote sporting activities.

Nana Opoku Ware, Otumfuo Tromoo Akwasihene, who was also present at the function, appealed to residents of the area to give the contractor their support to complete the project on time.

SHOW US, EUROPE: Africa Can’t Even Get It Right Twice