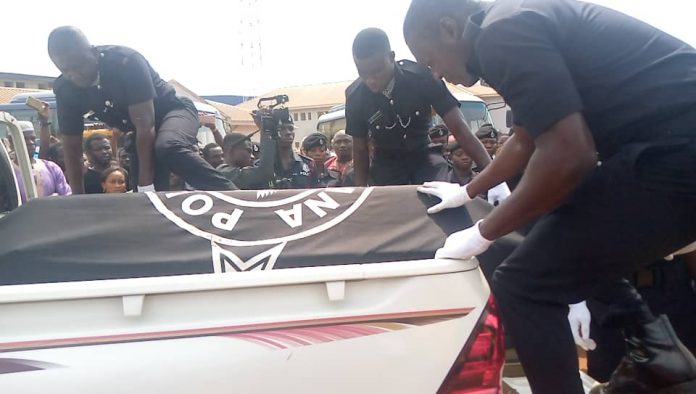 Ghana’s Vice President Dr. Mahamudu Bawumia has vowed the government will support the police with all it can to go after the killers of the two cops at Kasoa.

Unarmed Sgt. Michael Gyamasie and L/CPL Awal Mohammed were shot to death by suspected robbers on Wednesday at Gomoa Buduburam, near Kasoa in the Central region. Three suspects are being held over the crime with another suspect on the run.

Speaking during the burial ceremony of Mohammed in Kumasi on Friday, Dr. Bawumia said he has confidence in the police to bring closure to the case.

“I have full confidence in the IGP and his men to work hard to bring the perpetrators of this dastardly act to book. We are going to go after the attackers,” Dr. Bawumia assured.

He added: “In this particular case, three persons were arrested a few hours after the incident and one of the suspects is on the run. Those who have been arrested will face the full rigours of the law and those still on the run will be relentlessly pursued. They can run but they cannot hide. A reward of GHC 10,000 has been announced for the arrest of the person on the run. Insha Allah we will get all of them.”

Dr. Bawumia promised the government will equip the police to discharge their duties without fear, assuring them that personnel of the MTTD will now be armed.

“In the last month 5 unarmed police officers have been killed by criminals in the line of duty. This is unacceptable and the government will not sit down for this to continue. Henceforth all officers of the Police Motor Traffic and Transport Department (MTTD) will now be armed to ensure their protection. Also all police officers who go on “outside duties” will now be armed with weapons, bullet proof vests and helmets to be able to protect themselves.

“Thankfully, just this week, 4500 bullet proof vests have been delivered to the Police to help stem these unfortunate incidents. I urge police officers to wear the bullet proof vests and not say that they are uncomfortable to wear. Other logistical items have been delivered to the Police including non-lethal weapons. Government will continue to support the Police and more logistics will be delivered soon.   We must protect our police for them to be able to protect us.

“We are retooling the Service and Government has delivered 567 vehicles to the Police service since 2017. We have also given clearance for the recruitment of 4000 officers into the Service to boost the numbers,” he said.

Dr. Bawumia has appealed to the general public to support the police “to enable them to effectively discharge their mandate.”

“They deserve our support. Whilst we are sleeping in our homes they continue to protect us at the risk of their own lives. Once again, our hearts are with you, the family and we pledge government’s support during this moment,” he stressed.

This brings to five—the number of police officers gruesomely murdered in the last 30 days.

On July 30, 2019, Corporal Agatha Nana Nabin with the Northern Regional Police Command was shot dead at a police checkpoint on the Tamale-Kumbungu road in the Sagnarigu District.

The report is that armed and masked men in a grey saloon car discharged their weapons after being stopped at the check-point.

The killers took away two rifles belonging to the deceased and her colleague who escaped.

Some “persons of interest” are standing trial in connection with the incident.

His was found dead after working hours at Manso Abodom in the Amansie West District of the region on August 19, 2019.

Police are hunting for a key suspect as they interrogate three others as part of its investigations.

In less than 24 hours, another officer was also found dead while on duty at Akim-Swedru in the Eastern Region.

Lance Corporal Alhassan Asare has since been buried as police continue investigations.

‘I won’t disclose the cost of Akufo-Addo’s foreign trips’ – Ken...