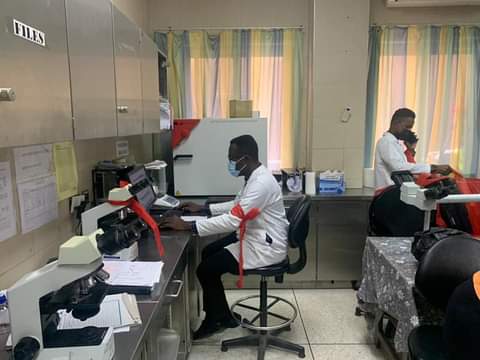 Striking laboratory workers across Ghana have been ordered to return to work, court documents show.

The Labour Court in Accra gave the order after the National Labour Commission (NLC) secured an interlocutory injunction to halt the industrial action.

The court order directs the workers who are members of the Ghana Association of Medical Laboratory Scientists (GAMLS) to return to work while they “comply with the procedure.”

According to the injunction granted by Justice Frank Aboadwe Rockson, “the respondents herein, whether by itself, its Executives, officers, members, agents, servants, employers or other persons are restrained from proceeding with its intended strike action…,” portions of the May 28 statement read.

The industrial action started from the Komfo Anokye Teaching Hospital (KATH) on May 20 as medical laboratory scientists and allied professionals protest the decision of the management to post two doctors to work in their Unit.

The protest which began as a sit-down strike has escalated into a total withdrawal of services at an emergency meeting on Wednesday, May 26.

Other regional branches of the group joined in the action in solidarity, leaving many patients stranded nationwide.

Calls by the NLC to get the protesting officials to come to the table has proven futile.

In the latest twist, the High Court wants the Association to halt the industrial action and hold discussions in accordance with the Labour Act.

Describing the strike as illegal, NLC Executive Secretary, Ofosu Asamoah earlier revealed that the Commission will withdraw their salaries and terminate the appointment if they fail to call off their industrial action.

However, the GAMLS members called their bluff adding that they are willing to risk it as long as the well-being of their members is protected.