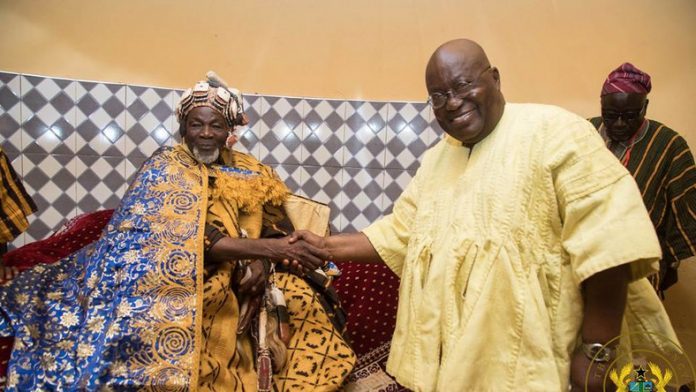 President Akufo-Addo has said he is not looking for praise for the successful installation of a new overlord for the Dagbon Traditional area.

The selection and installation of Abukari Mahama as the new overlord of Dagbon brought to an end decades of feuding that laid low the proud and ancient kingdom of Dagbon.

Delivering his 3rd State of the Nation Address on Thursday, President Akufo-Addo said:  “I was not looking to be accorded any special title or accolade, and I was certainly not looking for praise. I did want to do whatever I could to make sure that this long running sore, that was such a blight on Dagbon and Ghana, and which dragged down the development process in our country, could be resolved, and we could move on.

“We had spent enough emotional stress, enough time, enough energy and enough money on the Dagbon dispute; I wanted that amount of emotion, that time, that energy and that money to be spent on making Dagbon and Ghana prosperous.”

The committee of eminent chiefs that mediated the Dagbon chieftaincy crisis on 16 November made a symbolic and definitive declaration that brought  finality to the nearly 40-year-old conflict between the Abudu and Andani royal families.

The conflict for years slowed and impoverished every facet of progress in the entire Northern region and rattled the nation’s treasury.

The committee, led by the Asantehene, Otumfou Osei Tutu II, tasked to develop a roadmap to peace in Dagbon after the brutal assassination of its overlord, the late Yaa-Naa Yakubu Andani II and many others and destruction of the Gbewaa Palace at Yendi following days of extensive deadly clashes in 2002, on 16 November finally announced dates for the performance of the contentious funerals of the former two overlords, whose deaths have caused and continued to renew divisions among the two royal families.

The committee through years of engagement drew a roadmap document for the restoration of peace in Dagbon but its implementation has suffered multiple resistances from both feuding factions.