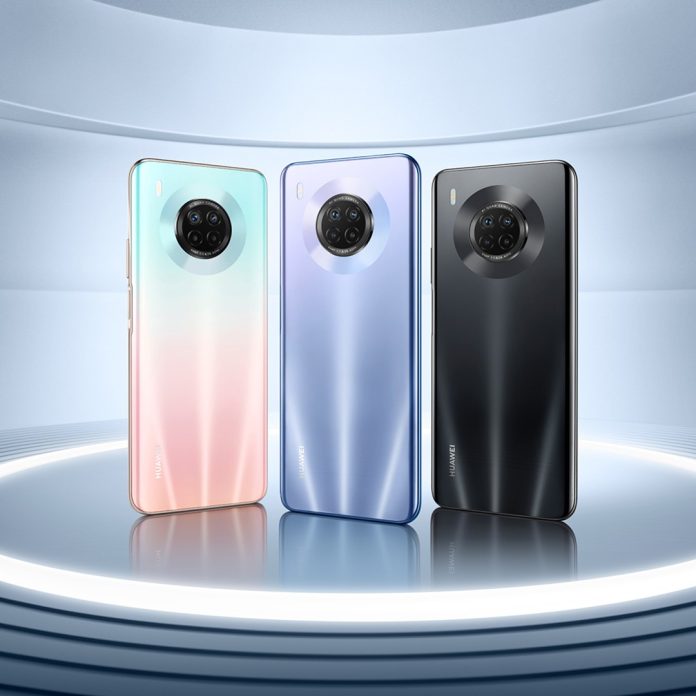 It has been a year since Huawei launched the Huawei Y9a in Ghana. Like the Samsung Galaxy A52, it has a quad camera setup and it really does deliver in nearly every aspect. HUAWEI Y9a certainly offers consumers a wide range of functions.

Let’s have a quick review and look at some features of the Huawei Y9a.

For starters, the Huawei Y9a sports a 6.63-inch HUAWEI Ultra FullView Display with a screen-to-body ratio of up to 92%, and bezels of the same size above and below the screen.

The back panel is made of 3D curved glass with an iconic Halo ring designed into it, just like the HUAWEI Mate 30 Series. It is also inspired by the concept of stage lighting; When held in different lights, three beams of light reflect from the bottom.

On its side, the HUAWEI Y9a sports the volume and power button which is integrated with fingerprint sensing. Both the actual sensing speed and accuracy are very high and on the top of the phone there is a 3.5mm headphone jack.

The HUAWEI Y9a is equipped with a bunch of hardware, tailored for a powerful gaming performance. During an hour of continuous gameplay, there is no noticeable framerate loss and the game runs smoothly with no lags or latency, even when switched between different scenes. The phone doesn’t heat up much either, which shows that it has pretty good cooling performance.

Generally, the most annoying thing about using a smartphone is that some apps may be “killed” in the background when the user has to leave the task at hand to answer a call or reply a message. The game or video they were just playing might be forced to shut down and need re-loading the next time you want to play which is not the case with the HUAWEI Y9a.

Thanks to the Game Assistant, users can open WeChat or other apps in the middle of the game, so they can reply messages without quitting. It also includes anti-mistouching and do not disturb features to ensure an uninterrupted experience, ideal for mobile game lovers. The EMUI 10.1 improves gameplay experience for users as well.

Besides hardware configuration, consumers might be concerned about software accessibility on Huawei smartphones. This is not a worry; with AppGallery, users can download most popular apps including, PUBG Mobile and other popular mobile games. Users can also use Petal Search, which is listed on AppGallery and can be added to the homescreen as a widget, to quickly search and download the apps they want easily.

Marking its first year anniversary, does the HUAWEI Y9a perform better than Samsung Galaxy A52?  We’ll take a closer look at their design, performance, price and more.

The HUAWEI Y9a sports a 6.63-inch HUAWEI Ultra FullView Display. Thanks to its pop-up camera design, the display remains notch-less and has no openings at the front for an unobstructed view. The rear camera is fitted and arranged in a ring, making the smartphone more recognisable from the back. The Samsung Galaxy A52 comes loaded with a 6.5-inch Super AMOLED display with a small hole on the top where the front camera sits in. From the back, it looks just like an average smartphone with nothing special. However, Samsung Galaxy A52’s AMOLED screen can display more vivid colours, which some consumers may favour while some may not.

Both the HUAWEI Y9a and Samsung Galaxy A52 have a 3.5mm headphone jack, convenient for users who are used to wearing wired headphones.

In addition, HUAWEI Y9a has a side-mounted fingerprint sensor that unlocks really fast, while Samsung Galaxy A52 comes with an on-screen fingerprint scanner that many consumers get accustomed to using but is less sensitive than that on a flagship. Therefore, Samsung users have often ended up preferring to simply enter their password to unlock the phone.

In terms of performance, the HUAWEI Y9a is powered by MediaTek Helio G80 with 6GB RAM + 128GB ROM, while the SAMSUNG GALAXY A52 is equipped with Qualcomm SM7125 Snapdragon along with 6GB of RAM and 128GB of storage. From specifications only, they are very close in performance.

It’s worth mentioning that the Galaxy phone includes a Google Store for users to download apps. For HUAWEI Y9a users, they not only can download apps from AppGallery, but also can use the Petal Search to search for the apps they need.

How Chinese people came together when separated by quarantine, creating hope,...