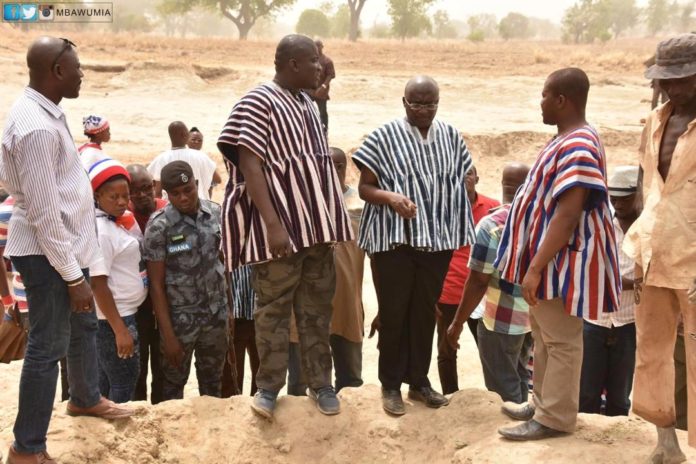 Often, we all get into the frenzy of overly criticizing and trivializing some government policies and even begin to think they are of no proper benefits to anyone. I have observed this in many spheres and the One Village One Dam policy of the ruling New Patriotic Party (NPP) administration is no exception. There are those who were expecting to see the government construct dams like the Akosombo Dam, Tono irrigation dam, and so on. To them anything short of such huge dams is nothing. What we often forget is that such policies have their own intended beneficiaries who would normally appreciate them in their scope and design different from what you and I may think.

Now I entreat you to have a critical look at the images attached to this article. Here Vice President Dr. Mahamudu Bawumia, then running mate to Nana Addo Dankwa Akufo-Addo on Tuesday, 24th February, 2016 kicked off a two-day tour of the Lawra Constituency in the Upper West region by visiting communities such as Dowine, Boo, Lyssah, Eremon, Nanyaari, Nowoyelle and Zambo. At Dowine Dr. Bawumia, the then Parliamentary candidate for Lawra, Anthony Abayifa Karbo and his campaign team came upon a group of women and a few men trying to dig for water using their hands and basic tools. They stopped and talked to them (the community folks) and they lamented their problems of accessing water during the dry season. This was a problem faced in almost all villages across the North. Then Dr. Bawumia and his team realized that having dams across many villages would really help the people in the dry season. The One Village One Dam was thus conceptualized.

What we all see in the images is nothing but a helpless desperate attempt by good citizens of this country in a ‘fruitless hunt’ for non-available water for farming, livestock and human use. This, in many occasions, has been the routine life of our cherished family and friends in some parts of the northern regions. Yes, you might not have seen huge and wide dams equivalent to twice the size of a football pitch under the One Village One Dam policy, but I sincerely believe that what government has provided and is providing, called the small earth dams, even if they are of the equivalent size of half or one-third the size of a football pitch, will be very useful to the people.

In the picture also are three images of newly constructed dams under the policy just for you to see how the affected communities have been transformed. These are just a sample of the many dams constructed across the northern parts of Ghana.

The policy was a practical solution to pressing needs of the people. I can imagine how emotional Dr. Bawumia could be during the conceptual stage of the policy. This is how in my view politicians should behave. Get closer to the people and offer policies that address their basic needs. It is not always about looking at the bigger picture of huge and flamboyant policies that do not really touch lives practically.

President Akufo-Addo and his administration have shown in the last three and half years through their many pro-poor policies that indeed they are very much concerned about liberating the sufferings of the Ghanaian people at the community, family and individual levels, while keeping pace with issues at the national level through policies such as the Free SHS, One Constituency One Ambulance, One District One Factory, One Constituency One Million Dollars, and so on.

President Akufo-Addo and Dr. Bawumia have further shown their commitment to addressing the irrigation deficit in the country by working so hard to commence work on the Pwalugu multi-purpose dam and irrigation project which has the capacity to increase the size of Ghana’s irrigable land by about 24,000 hectares from the current 12,980 hectares from independence. Upon completion the Pwalugu project will be the single largest public investment in irrigation since independence.

We are in yet another election year and campaign season, and I can’t wait to see what innovative pro-poor policies the competing political Parties roll-out. Of course, the promises will be measured against the Parties’ track record in handling similar pledges in the past. Until then it is kudos to President Akufo-Addo and his administration for the very important One Village One Dam Policy.

I am pretty sure that the over 307 dams either in active function or almost functional have in no doubt lessened the burdens of the affected communities in the North. May they forever find the dams useful and keep President Akufo-Addo and his administration in mind always.

Hustle and don’t shout vanity when you see someone’s mansion –...