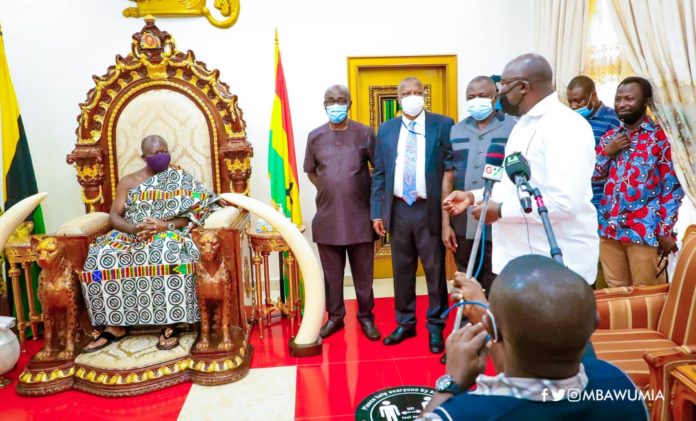 The Vice President, Dr Mahamudu Bawumia, has assured the Asantehene, Otumfuo Osei Tutu II that the governing New Patriotic Party is committed to a peaceful campaign towards this year’s elections, as well as a peaceful process for the election itself.

Dr. Bawumia called on the Asantehene on Sunday, October 11, to seek his permission and blessings before embarking on his four-day tour of the Ashanti Region.

While seeking the blessing of the Asantehene to start his campaign tour, Dr. Bawumia told the Asantehene the NPP’s 2020 campaign is focused on
communicating the party’s inclusive development and interventions in the past three and half years, as well as the government’s forward-marching message for the next four years.

“Your Majesty, I am here this morning to seek your permission and blessing before I start my tour of the Ashanti Region,” Dr.Bawumia said.

“Our mission is to spread the message of the good works the Akufo-Addo government has done in the past three and half years, and also tell the people our good policies for the next 4 years, which we believe they will listen and give us four more years to do more.”

The Vice President added that the 2020 general election is a contest of ideas, and not war, and assured the Asantehene of the NPP’s resolve to stick to that by focusing on the NPP’s development-oriented messages.

“The election is not war. It is a contest of ideas and that is what we are doing; to tell Ghanaians what we have done and what we will do for them.”

The Asantehene commended the Vice President for the path his party has chosen and reiterated his call on stakeholders to focus on issues ahead of the elections.

The Asantehene also admonished all parties to ensure that they protect the peace in the country before, during and after the elections.

Anomalies In BVD System Are Threatening The Integrity Of December, 2020...