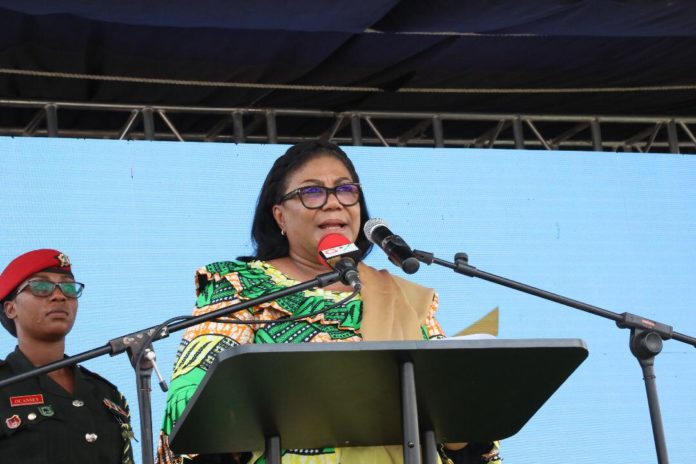 The First Lady of Ghana, Mrs. Rebecca Akufo-Addo, has urged corporate institutions and Non-Governmental Organisations (NGOs) to partner government to deliver the best of social amenities to the populace.

She stated while it may be convenient for the populace to sit back and expect government to deliver it all, the reality required all, especially corporate institutions to chip in their quota.

The First Lady made the comments when she joined the Board and management of GCB Bank Limited to commission the newly renovated and refurbished Ussher Polyclinic and newly constructed Jamestown Surgical Theatre in Accra today.

Built between 1963 and 1964 the Ussher town clinic as it was formerly called over the years transformed from a town clinic into a polyclinic, increasing its patients and human traffic, thereby exerting intense pressure on its facilities.

Often the first point of call for the people of Ashiedu Keteke sub metro and its environs, the facility serves a population of over 146, 000 patients with the Out Patient Department (OPD) recording hundreds of cases on a daily basis.

Mrs Akufo –Addo said The Rebecca Foundation of which she is Founder has over the years been working to augment the effort of government to provide quality healthcare to the populace, especially in deprived areas and has during this period been urging corporate institutions and benevolent individuals to join the ‘train’.

She said she was elated at GCB Bank’s decision to heed the call to partner government in enhancing health delivery in the country by not only renovating the Ussher Polyclinic, but constructing a surgical theatre as well.

As a way of showing The Rebecca Foundation’s support of GCB Bank’s social responsibility initiative, Mrs. Akufo-Addo announced the donation of some health equipment to the Ussher Polyclinic and Jamestown Maternity Theatre stating, “at The Rebecca Foundation, we also believe in the philosophy of partnership for enhanced health delivery and so given our shared belief and vision, we are donating some hospital equipment and supplies provided by the UNFPA, to support the work of the Ussher Polyclinic and the James Town Maternity Theatre.

Prior to GCB Bank’s corporate social intervention, the Ussher Polyclinic leaked badly anytime it rained, the washrooms were inadequate which caused a huge sanitation problem for staff and patients while exposed electrical wires hung all around putting both patients and staff of the clinic at risk. Several cases had to be referred to Korle-Bu Teaching Hospital or the Ridge Hospital because of obsolete equipment to enable treatment.

Following GCB Bank’s intervention however, additional rooms have been constructed to increase the bed capacity and increase the duration of admissions as well as the provision of modern medical equipment to facilitate the treatment of otherwise referral cases.

Expressing their appreciation for the kind gesture, Mayor of Accra, Hon. Mohammed Nii Adjei Sowah said the facility will go a long way to ameliorate the health delivery challenges of the community. He advised personnel of the Hospital to ensure the longevity of the newly installed medical equipment.
The occasion was also used to out-door the Odododiodioo constituency’s newly allocated Ambulance under the “One constituency one ambulance” programme.