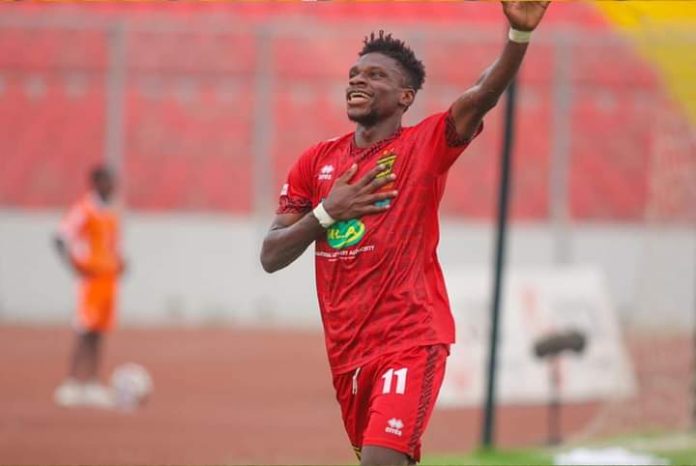 According to the Spanish media outlet, the Porcupine Warriors attacker is a prime target for FC Sevilla who are in search of a top scorer for the 2022-23 season.

The 20 year old who already managed to become the true sensation of African football. A talented striker, he currently defends the shirt of Ghana’s Asante Kotoko Sporting Club , with whom he has scored 18 goals and two assists in 23 games.

Under 20 international with Cameroon, he is on the verge of debuting with the senior team, also being in the orbit of Cholo Simeone’s Atlético de Madrid, where they see him as a project for the future.

His physical conditions and his punch make him a very interesting attacker, although logically it would be a bet for a team like Sevilla FC . If he ends up opting, he would be more of a incorporation for his reserve team than for the first team, due to his young age and because it was his first experience in Europe. Just the same thing that would happen to him at Atlético, where they do not rule out signing him to transfer him to a lower category club.

In Spain, another of the clubs with which there have been contacts is Elche , where its owner, businessman Christian Bragarnik, who knows world football well, would also see it as an opportunity to do business in the future. Its market value is 250,000 euros (according to Transfermarkt), so it would be an operation that would not require a high cost.

Franck Mbella Etouga can play both as a center forward and as a winger. He trained in the lower divisions of the Nkufo Academy in his country, from where he went through AS Fortuna de Mfou also from Cameroon.

EC officials arrested over attempts to tamper with ballots