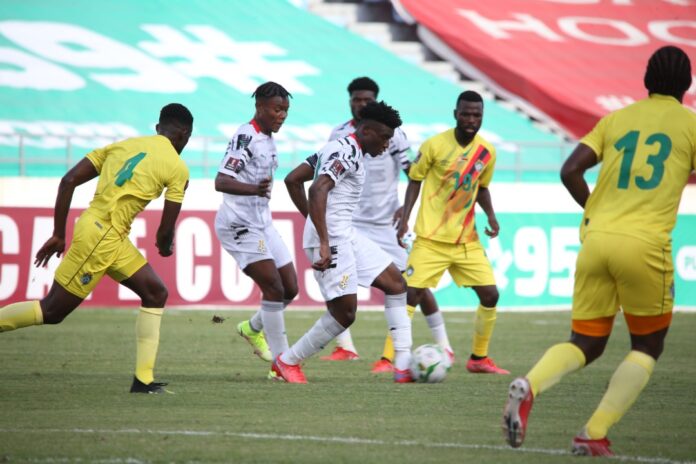 Rejuvenated Black Stars whipped the Warriors of Zimbabwe in their FIFA World Cup qualifier on Saturday evening at the Cape Coast stadium.

The Ghanaians started the game on a blistering pace attacking and firing from all angles and cylinders to put the visitors on the back foot.

Five minutes into the game, AFC Ajax Amsterdam star-boy, Kudus Mohammed scored the opening goal of the match after he was nicely setup by goal shy Jordan Ayew to give the home team a deserving lead.

Kudus should have made it two to Ghana on two occasions but fluffed his lines and failed to make good use of the chances he got.

Ghana controlled the game and dominated precedings with some scintillating performances from the entire team in the first half.

Youngsters, Kudus, Kamaldeen Sulemana and Issahaku Abdul Fatawu were the main threat for the Ghana team in attack as they pushed the defense back on their heels.

Just after the break, RC Strasbourg Alsace defender, Alexander Djiku was adjudged to have brought down the Warriors striker illegally which resulted in a spot kick which was converted by Knowledge Musona to make it one all.

Ghana upped their game after conceding the equalizer but Kudus failed to make the most out of the chances that came his way.

Finally, after the referee ignored Sulemana’s call for a clear foul on the left wing, Arsenal star Thomas Partey took matters into his hands as he weaved through the opposing team defense to score with a sublime strike to restore Ghana’s one-goal lead.

Captain Andre Ayew came into the party to score the icing on the cake goal with a header following a beautiful cross from left-back Baba Abdul Rahman to make the final score 3-1.

Ghana are now on six points and move within a point behind leaders of the group , South Africa who are on seven points and unbeaten in three games.

The Stars will travel to face the Warriors of Zimbabwe on Tuesday in Harare in their next qualifier.