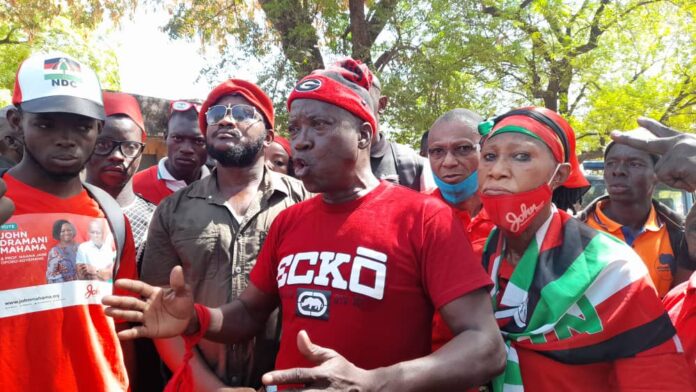 A great blanket of thick, dark-coloured smoke from bonfires hung over the highways of the Upper East Region with a sporadic display of fireworks as aggrieved supporters of the National Democratic Congress (NDC) held a demonstration Wednesday over the results of the presidential election declared by the Electoral Commission (EC).

Strong-looking police officers, acting on strict orders from their commanders, formed a human wall in front of the gates to the EC’s regional office block in the capital, Bolgatanga, to prevent the protesters from entering the premises.

But the armed police officers gave way involuntarily and the iron gates broke wide open the moment the NDC’s “no-nonsense” First National Vice Chairman, Chief Awudu Sofo Azoka, arrived, letting into the yard a forceful ‘flood’ of NDC supporters behind him and some other notable leaders of the party. The force that went with the flow of the ‘flood’ into the EC’s compound was so akin to the ‘the stampede in the gorge” in Don Hahn’s The Lion King that one person, unsurprisingly, got injured.

They came with wrath to deliver a petition to the EC’s National Chairperson, Jean Adukwei Mensa, through the Upper East Regional Director of the commission, William Obeng Adarkwa. The director was reported to be absent. The white two-storey block looked almost empty. A man, identified only as “Joe” and said to be an EC staff, received the petition, encircled by men and women in red and black outfits.

The petition presentation was the second business of the day, the party’s supporters having taken a long walk through the capital’s busy roads in a strong protest that had tyres burned at major intersections and a large collection of placards displayed above countless heads. The third and last activity— a rally in the sun— would take place about an hour later at the Ramsey Stadium, known previously as the St. John’s Park, where the road protest march started in the morning hours. There the party’s notable figures would address supporters in turn.

The three-page petition describes the outcome of the recently conducted polls and the posture of the EC in the aftermath of the elections as a recipe for chaos and calls on both local and international bodies to ensure justice is done.

“As a result of these unacceptable practices, the rank and file of the NDC in the Upper East Region is using this platform to request all well-meaning Ghanaians, for instance, members of the Peace Council, members of the Council of State, religious bodies, traditional rulers, Civil Society Organisations and the international organisations such as EU, AU, ECOWAS and UN to bring pressure to bear on the Electoral Commission of Ghana to pay attention to the democratic tenets by ensuring that justice is done through proper collation and declaration of the election results of 2020. It is a known fact that the EC in most cases put the electoral laws aside and did what suited them,” the petition, signed by the NDC’s Upper East Regional Secretary, Donatus Akamugri, stated.

About two hours earlier, two men reported to be members of the National Security had joined the demonstration in the guise of NDC supporters. They were recognised even before the protest march began. Akamugri said the men were “hoodlums planted by the NPP (New Patriotic Party) in the NDC demonstration to deliberately cause violence during the demonstration and they will say the NDC is violent”. They were not spared. Some youths whipped them before they were allowed to go.

“We won’t swallow injustice for peace to prevail”— NDC

The NDC’s presidential candidate, John Dramani Mahama, had made it clear before the polls that his party would not accept the results of “a flawed election” after members of some opposition parties in Ghana repeatedly found fault with the EC particularly with the introduction of a new voters’ register and the registration exercise itself.

The elections were eventually tainted with some noteworthy anomalies that also had the European Union (EU) election observers openly say that state resources were misused and collation was less well organised.

The NDC also has been very critical of the National Peace Council (NPC) for being quiet at the time concerns were being raised about the “flaws in the electoral processes” before the December 7 general elections much as it has also been upset against some media houses for biases and for calling some election results that turned out to be incorrect.

“You are saying that we should swallow injustice for peace to prevail. We are saying, as members of the NDC, we are never ready to exchange justice for peace. If they don’t give us justice, they will not realise peace in this country,” Akamugri told newsmen at the forecourt of the EC’s office minutes after the petition had been delivered.

Later at the Ramsey Stadium rally, a former Upper East Regional Minister, Prof. Ephraim Avea Nsoh, told a determined, cheering crowd that if the current democratic system was allowed to be so compromised as to lead Ghana back to “the gun”, the NPP, the government and the EC should be informed that the NDC— as the sole architect of the 31st December Uprising, the June 4 Revolution and the democratic Fourth Republic— was ready and was ahead of them.

The demonstration, which saw even women of advanced years and some persons with disabilities also participate, did not just register the NDC’s unreserved displeasure in the petition lodged against the EC for the anticipated results. It also revived the dampened spirits of the umbrella-party supporters in the Upper East Region— a stronghold of the NDC.

The NDC is unyieldingly challenging the election results nationwide with massive street protests against “rigging” whilst pressing for audit of the election results sheets (colloquially also called the pink sheets) after the EC declared that the NPP’s Nana Addo Dankwa Akufo-Addo won the election with 6,594, 875 votes (51.48%) and announced that the NDC’s John Dramani Mahama polled 6,130,698 votes (47.86%).