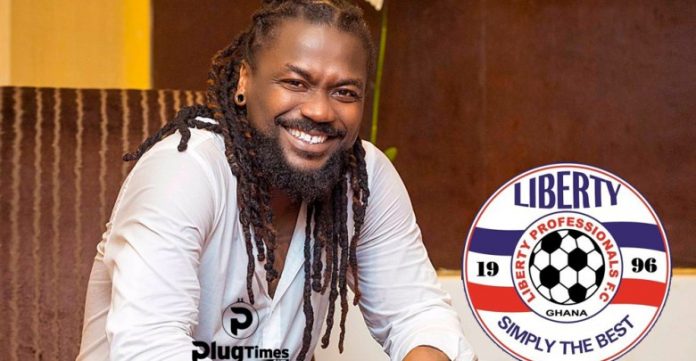 It was announced last week that reggae-dancehall artiste Samini — real name, Emmanuel Andrews Samini — has been appointed as brand ambassador for Ghana Premier League outfit Liberty Professionals, in a bid to whip up support for the side.

It does make sense, as both reside in Dansoman, a suburb of Ghana’s capital, Accra. Samini joins Donzy (Inter Allies) and Jupitar (Dreams FC) as contemporary musicians recognized as being affiliated/associated with Ghanaian football clubs. But which other clubs could do with same? And which artistes tick those boxes best?

The veteran hip-life artiste has never hidden his affection for the Porcupine Warriors, his native Ashanti Region’s premier club. And while he may no longer be the biggest draw on the Ghanaian music scene, TiC (Nana Kwaku Okyere Duah) would still be a fine ambassador for the Porcupine Warriors. The rapper himself could find such a deal hugely beneficial in his ongoing mission to re-establish himself as a force.

Ghana’s oldest club, Hearts, eagerly seeks a modern and fashionable edge to its affairs. Elvis Herman Hesse — elected earlier this year as Chairman of Hearts’ National Chapters Committee (NCC) — for instance, plans to implement a ‘catch them young’ policy aimed at making the club attractive to a younger generation of supporters. Should Hearts feel the need for a relatable face to project such a youthful and exciting image, there is one in ‘new school’ hip-life act Kwesi Arthur (Emmanuel Kwesi Danso Arthur). The Ground Up artiste and one-time BET Awards nominee has openly spoken of his love for the Phobians and has been seen in their shirt during public appearances. What’s not to like?

Sekondi-Takoradi, Ghana’s famous twin city, almost always comes alive when a dose of entertainment is on the menu, mainly in the form of good music or good football. Nobody holds the ‘town’ down on the musical front these days better than the versatile Kofi Kinaata (Martin King Arthur) does, but, had things turned out differently, the singer-cum-rapper might have been dazzling on the soccer pitch instead. Kinaata — who ultimately chose music over football and has, needless to say, made a success of that decision — could still have a role in the sport if arguably the biggest club in Sekondi, Hasaacas, let him. The tweet below makes you wonder just what ‘Hasmal’ are waiting for: Doooooo!

It’s easy to forget just how strong a force Real Tamale United (RTU) — the club that launched the career of, among others, Ghanaian legend Abedi Ayew — once were, given how far from grace they’ve fallen. In their quest to rise from the depths of Ghana’s lower tier, RTU could use a little buzz — and who better to provide it than the hugely popular Fancy Gadam (Mujahid Ahmed Bello), ‘King of the North’?

Tema Youth has a place no more in Ghana’s top-flight, but the side remains one of the domestic game’s most exciting. Still, one can’t help but feel that Wilfred Osei Kwaku’s team could go up a notch or two — off the pitch, at least — if they made their pick from among the abundance of music stars that Tema, arguably the current hub of Ghanaian artistry, has to offer. Okay, say, Hearts do sign up Kwesi Arthur; there are still so many top Tema-based acts — Sarkodie (Michael Owusu Addo), maybe? — who could light up the club’s profile and, perhaps, widen its fanbase.

DEAD ON ARRIVAL? Kotoko’s New Board Is Set Up To Fail