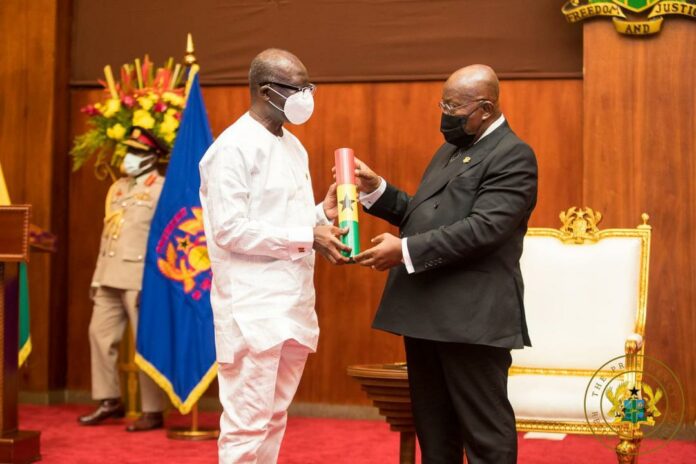 Speaking at the swearing in ceremony of Ofori-Atta on Tuesday, Akufo-Addo said the ravages of COVID-19 on the Ghanaian economy are obvious for all to see. However, he said Ghanaians are looking up to his administration and for that matter the Finance Minister to help rescue the economy from the damage caused it by the pandemic.

“Everyone who watched him (Ken Ofori-Atta) on national television at the Committee hearings can understand why I had little choice but to re nominate him to serve another four years as Minister for Finance and why by the Grace of God he will be at the end of my second and final term of office, the longest serving Finance Minister in the history of the fourth Republic” President Akufo-Addo stated.

“Over two days, he exhibited clarity of thought, a clear understanding of how to grow an economy, and what prospects the economy holds for the Ghanaian people. He provided a staunch defense for his record in office as Finance Minister from 17th February 2017, when he inherited a weak, faulting economy from the Mahama administration and helped nurse the economy back to good health by 6th January 2021,” the President further noted.

According to the President, The Finance Minister “highlighted what public service means to him and outlined the plans he has to help revitalize the Ghanaian economy and restore it to the kinds of growth and expansion witnessed before the onset of COVID-19”.

“Mr. Finance Minister, i congratulate you heartily on your appointment and I am sure you know that the Ghanaian people are expecting you to put the economy on a sound footing once again and help lead it out of the ravages of the pandemic” President Akufo-Addo said.

The Finance Minister, Ken Ofori-Atta, in his response, registered his thanks to the President for the confidence he has reposed in him to serve as Finance Minister for another four years. He indicated that he remains committed to the vision of the President which is, building a Ghanaian beyond aid, “a prosperous and self-confident Ghana in charge of her economic destiny”.

“Mr. President, the work ahead will be monumental but we are not naive regarding the effort required. Like Nehemiah, we continue to remain resolute in the face of this global pandemic and skepticism and we know our Lord will give us success as He did in the times of Nehemiah and has done for us since we came into government in 2017 with two fish and five loaves” Ken Ofori-Atta said.

The Finance Minister Ken Ofori-Atta, missed his vetting on the 8th of March 2021, due to some post COVID-19 recovery complications he suffered. Ken Ofori-Atta upon advise from his doctors, traveled to the United States on the 14th of February 2021, for specialized treatment. He spent a little over a month in the US for his treatment and recovery.