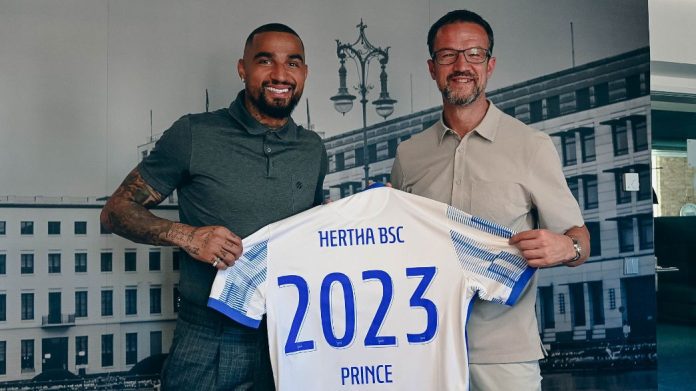 The Ghanaian made a return to his old club where it all started for him 28 years ago at Hertha BSC for the 2021-22 season.

The Berlin-born Prince has finally extended his contract until June 2023 and will don the blue and white of Hertha next season at least.

“The relegation play-off proved to us just how important Prince is for our team, and he didn’t show it just then. He’s our leader, getting stuck in and pushing everyone else along with him.”

We’ll need players just like that next season,” said director of sport Fredi Bobic on Wednesday, as the contract was signed. Our number 27 himself is also happy: “I’ve always said how special and valuable this club is to me, and tried to show it both off and on the pitch. I feel good, I’m hungry to get going and excited to keep going forward with the lads.”

Prince Boateng joined Hertha’s youth academy aged just seven and came through the ranks, until he finally made the step to the first team in 2005. Following 53 appearances in all competitions, five goals and nine assists, the attacking midfielder joined Tottenham Hotspur in 2007.

He also played for teams like Borussia Dortmund, FC Barcelona, AC Milan and AC Monza before his move back to the Berlin giant.

He played in two consecutive World Cups for Ghana in 2010 in South Africa when Ghana reached the quarter final and in 2014 in Brazil.

Opinion: He who alleges must prove – Ace Ankomah