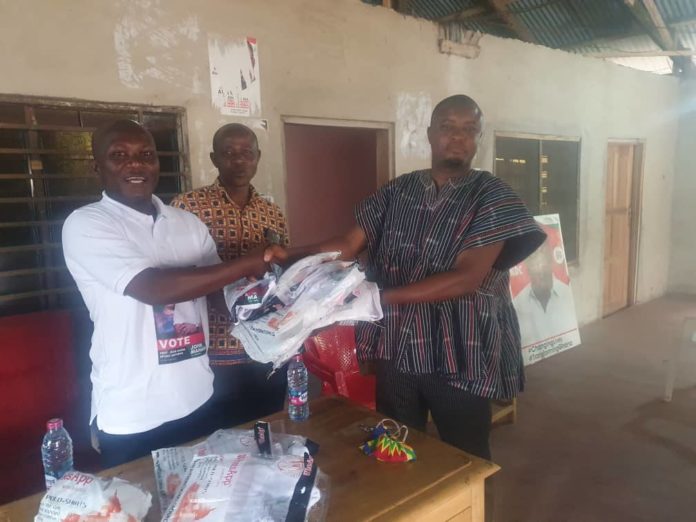 Mr. Michael Tetteh Kwetey, a former Ningo-Prampram Constituency chairman of the opposition National Democratic Congress (NDC), has urged his party members to work hard to solidify their front as the party works hard to return to government in 2021.

The youthful former party chairman explained the need for the strong bond as a tool that will make the NDC more attractive to Ghanaians as the party begins its political campaign to explain its laudable and workable policies to the electorate.

Mr. Kwetey, who recently toured seven (7) constituencies he adopted to support them with resources, both financially and materially, to recapture power and as well, retain their seats for the NDC come December 7 in five regions across the country, made these calls in his engagements with members of the party at the various constituencies he visited.

The adopted constituencies in the five regions are South Builsa and Nadoli-Kaleo in the Upper East and West Regions; South Kintampo in the East Bono Region; New Edibiase and South Offinso in the Ashanti Region; Sefwi Akontombra Constituency in the Western-North Region and Ningo-Prampram Constituency in the Greater Accra Region.

At the South Builsa Constituency, Mr. Kwetey was hosted by the area’s Member of Parliament (MP), Dr. Clement Apaak, and the constituency executives where he presented items which included branded quality Lacoste T-shirts of John Mahama and his running mate, Jane Naana Opku-Agyemang, and an undisclosed amount of money to the party and MP to start effective campaigns.about:blank

After a closed-door meeting with his hosts, he told the media that the constituency was poised to work hard to increase the votes of the NDC “because our message of hope and ‘Rescue Mission’ is going down very well with the electorate. The NDC cannot disappoint Ghanaians who have been disappointed by this government that promised them a lot but has performed very little.”

At the Nadowli-Kaleo Constituency where Anthony M. Sumah, the PC, and his constituency executives welcomed Michael Tetteh, a wide discussion of challenges the party in the area was faced with ahead of the 2020 general elections was held.

The core of these challenges was a lack of resources to run the engine of the constituency to first and foremost, keep the parliamentary seat for the NDC, and secondly garner more votes for the presidential candidate.

Acknowledging the concerns his hosts raised, Michael Tetteh promised to offer the needed physical resources to energise the base of the NDC to motivate them to give off their best towards the victory of the party.

Therefore, to begin with, his promise of providing physical resources and support, Mr. Kwetey presented some branded quality Lacoste T-shirts of John Mahama, NDC’s presidential candidate, and his running mate, Professor Naana Jane Opoku-Agyemang, to the executives and youth groups in the constituency.

Mr. Anthony M. Sumah, the PC, together with his constituency executives, spent quality time with the selfless, dedicated, committed, visionary, and resolute Mr. Kwetey, who was conferred with Chieftaincy the: ‘Paati Maaloo-Naa’, which means ‘Party Development Chief’.

At South Kintampo Constituency in the East Bono Region, Mr. Michael Tetteh Kwetey was given an ecstatic welcome by the Member of Parliament, Hon Felicia Adjei, Constituency and Regional executives, as well as branch executives.

The core challenges facing the constituency were made known to him during a marathon meeting. After making his donations to the MP and the party in the constituency, he spent time to interact with the base of the party to inspire them to be relentless in their efforts in making sure they worked hard to bring the NDC into government.

He then took his tour to South Offinso and New Edibiase in the Ashanti Region, as well as the Sefwi-Akontombra Constituency in the Western-North Region, where he took the opportunity to interact with party executives and community members.

He also donated resources to all of them to enhance their campaign activities.

He assured them of his continuous support, saying, “The NDC needs you to reciprocate our commitment to you by working hard for us to have a landslide victory this year.

“Let’s all put aside our differences and support the party to win massively to rescue Ghana from this failed and cruel government led by President Akufo-Addo.”

Mr. Kwetey would be scheduled to pay a similar visit and support to his home constituency, where he would be hosted by the MP, Hon. Samuel Nartey George, and executives.

It would be recalled that the Presidential Candidate of the NDC, John Dramani Mahama launched ‘Operation Adopt A Branch, Constituency’ in Accra, this year, to encourage party members to get involved in the campaign.

That, he believed, could bridge the gap between the leadership and branches and dispatch the needed resources to urge the branches on to give off their best ahead of his party’s political victory at the polls on December 7.