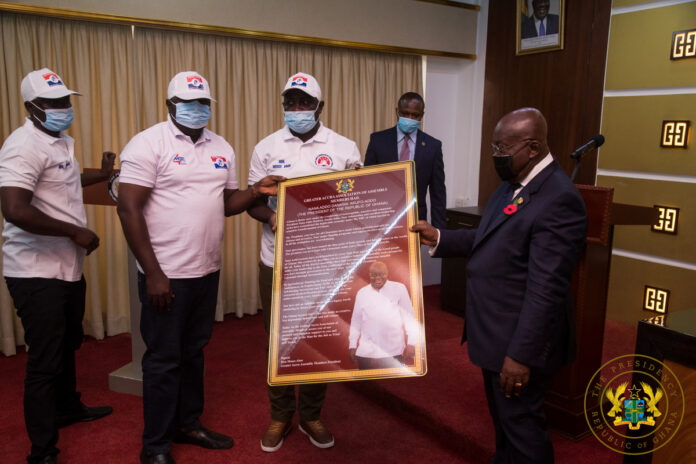 The Greater Accra Association of Assembly Members has declared its support for President Akufo-Addo ahead of the December 7 general elections.

According to the Association, it finds the President more trustworthy and competent in keeping electoral promises than his contender former President John Dramani Mahama, the flagbearer of the opposition National Democratic Congress (NDC).

As a result, argued the Association, its members will be better off with Akufo-Addo as President of the country come January 7, 2021.

“Prior to the inception of Free SHS, we would always wake up to knocks on our doors by parents who could not afford to take their wards to school. The implementation of Free SHS has lifted the burden of us. Because of NABCO, no one harasses us for jobs anymore,” Stephen Kwasi Acquah, spokesperson for the Association said during a courtesy call on the President on Tuesday, November 10.

“We believe that if we support you, and ensure that you get four more years, our circumstances, as Assembly Members, will be better off under your Government,” he added.

Touching on the campaign promise to pay Assembly Members a monthly salary by former President Mahama, Kwasi Acquah stated that that pledge can only be fulfilled by a Government led by President Akufo-Addo.

“…In the 2012 and 2016 manifestoes of John Mahama and his NDC, the candidate who is today telling us he will pay us if he wins the 2020 election, the pledge to pay Assembly Members was made in those manifestoes,” the spokesperson said.

“He (John Mahama) reneged on the pledge he made to pay us when we voted for him in 2012, and that is why we did not vote for him again in 2016, even though he had repeated that pledge.”

“If there’s someone who we believe can pay Assembly Members on a monthly basis, then it has to be Nana Addo Dankwa Akufo-Addo,” he stated.